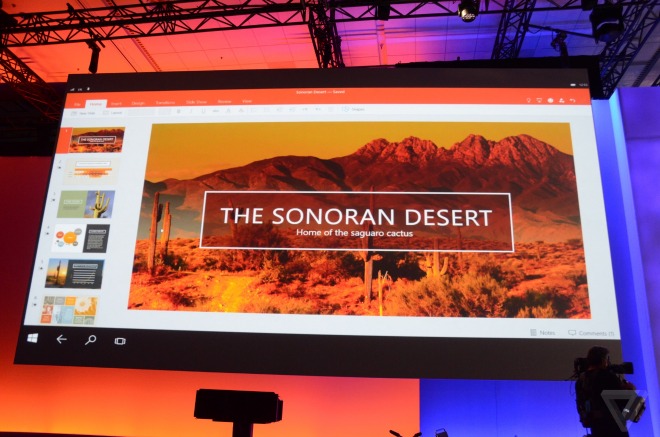 This kicks in when you connect a smartphone running Windows 10 to a monitor. The UI you’ll see on the monitor won’t just be a 1:1 representation of the handset’s screen. Instead, the phone is basically turned into a makeshift PC, which will even work with a mouse and keyboard for interaction.

Initially, you see your phone’s Start screen on the left side of the monitor, but if you open a universal app that will take over the whole width of the monitor, as you can see from the screengrab above. So you’ll have no wasted space, and you’ll be able to do some work in a much easier way than if you were to simply glance at a representation of your phone’s screen.

Furthermore, all the usual PC keyboard commands will work in this mode, so you can use Ctrl+C for copying, Ctrl+V for pasting, and so on. Microsoft says it wants to let smartphones scale up to a full PC-like experience. Unfortunately it looks like existing Windows Phones, once updated to Windows 10, won’t be able to take advantage of this feature. That’s because it requires new hardware in order to drive the dual-screen experience.

You may remember that Ubuntu thought about something similar a few years ago, but the Ubuntu for Android project flopped eventually – perhaps because it was trying to do more (run ‘full’ Ubuntu when the phone was docked), but also because it wanted to pair two different operating systems from two different companies on the same device. In Microsoft’s case, it’s all Windows, so Continuum has no reason not to be successful.