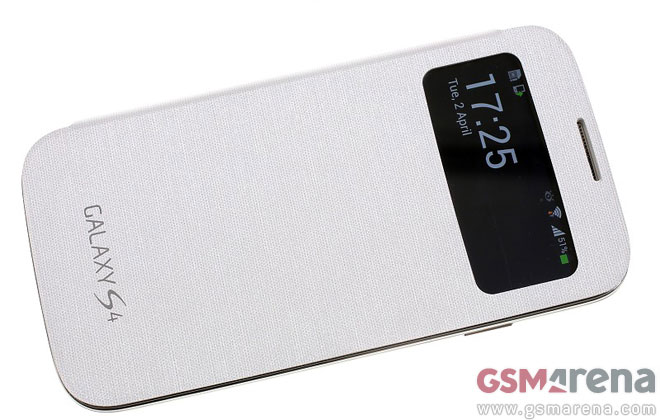 Basically, the S View Cover is an upgraded version of the Flip Cover, which has a neat cut-out window that allows you to take a quick peek at your Galaxy S4 screen to see what’s new or to just check out the time. Sounds good on paper, but is it worth the $70 price tag? Follow us to find out.

The S View Cover is a two part affair – the screen cover has a leather-like texture, while the back has the same hyperglaze finish as the the standard battery cover on the Galaxy S4 that it replaces. The front cover is connected to the back one very securely, and opens up with a flick of a finger.

The outer side of the S View Cover’s front part is finished with a soft-touch synthetic leather with “Galaxy S4″ written on it. Keep in mind that dirt accumulates quite easily, but cleaning it isn’t particularly tedious either.

On the inside, it’s soft, with a bit of padding added that not only helps protect the screen, but also cleans it from fingerprints. Samsung has put a lot of thought into the S View Cover, as it has even added a cut out for the home button to avoid unwanted presses.

By itself, the S View Cover weighs 31 grams, so it does add a noticeable amount of weight to the S4, but not so much as to make it uncomfortably heavy. It also adds to the overall thickness of the device, but that’s to be expected from an accessory that protects your device from accidental scratches.

The little window cut-out on the S View Cover is its key selling point. It is made out of see-through plastic, which is thin enough so that you can press it and answer or reject an incoming call.

A little gripe we have with the S View Cover is that it makes the volume rocker much harder to press. It’s not the end of the world, but might be annoying if you constantly readjust the volume.

Once you’ve closed the S View Cover the Samsung Galaxy S4 goes into a special mode displaying just the notification drawer, the clock and date, missed calls, new emails and messages, as well as the currently played song (only the Samsung Music Player is supported). We tried to shuffle through songs but to no avail.

However, you can answer or reject incoming calls without opening the cover. Simply apply a bit of pressure onto the window itself so that the screen of the phone can register it and you’re good to go. 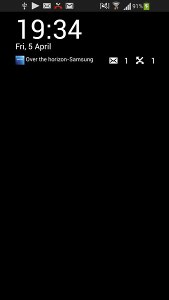 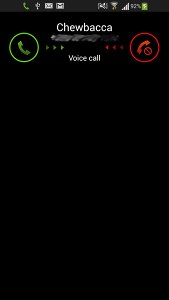 To save battery, the screen goes all black with only the part that is located directly underneath the S View Cover window remaining active. As a result, the Galaxy S4 hardly consumes any battery when you’re checking the time or pending notifications.

Happily, thanks to the built-in magnet in the front cover of the S View Cover, flicking it automatically unlocks the screen. More importantly it skips past your lockscreen (unless you have set up a pass code) and goes straight to your homescreen. Since the cover is certain to block any unwanted presses when the Galaxy S4 is in your pockets, this is quite a smart time-saving feature to have.

Currently sold in white and black variants, the Samsung Galaxy S4′s S View Cover will set you back $70 (suggested retail price), which is quite steep as is usually the case with official accessories. The good news is unlike the S Wireless Charging Pad and Cover combo that we reviewed recently, purchasing it might be justifiable.

In addition to protecting the Samsung Galaxy S4 screen, the clever cover is also cool looking and saves you the trouble of turning the massive 5″ display on just to check out the weather or if you’ve had a missed call or message. Ultimately, it’s one of the more sensible Galaxy S4 accessories available.