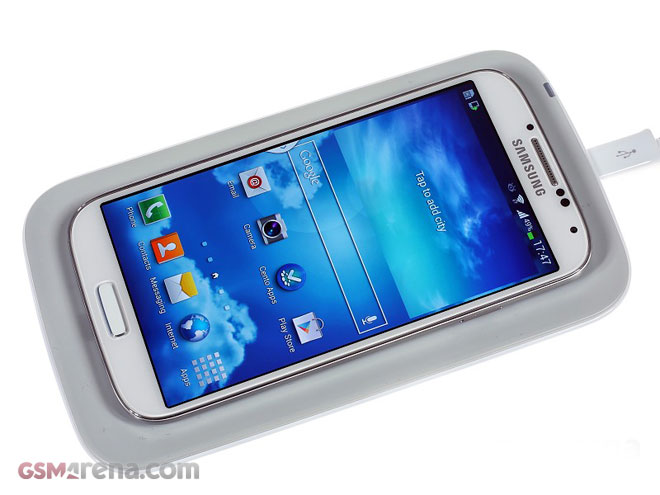 Eager to catch up with its domestic rival LG and the traction-gaining Finns at Nokia, the Galaxy S4 sports wireless charging capability, as well. However, instead of having the feature built it (which would have made the smartphone thicker for everyone), wireless charging comes in the form of an optional accessory kit, which features a different back cover and the charging pad.

The Wireless Charging Pad is not only meant be more convenient in some cases but it also aims introduce a dash of cool when charging the Galaxy S4 2,600mAh battery because, let’s face it, plugging your smartphone into the wired charger is so 2003. Let’s dive right in and see if it delivers, then.

The sides of the Wireless Charging Pad are built entirely out of plastic, which feels quite similar to the one used for the Samsung Galaxy S4 body. The bottom sports a rubber layer to prevent the charging table from moving about.

On top Samsung has used a different kind of plastic that’s not as slippery as the one used for the sides to prevent your smartphone from sliding around. It isn’t quite as good as the rubberized feet of the Charging Pad, but we guess Samsung didn’t have a choice in order to not mess with the inductive charging process.

Anyway, the top is where the Samsung Galaxy S4 is put to rest and charge. A major disappointment, however, is that the smartphone must be placed precisely in the center of the Charging Pad to get the electrons moving its way. If you move it by a couple of centimeter in any direction the inductive charging will stop. That’s why Samsung has drawn a little dotted circle in the middle of the table to show where exactly the Galaxy S4 should be placed.

You don’t have a lot of room for maneuver vertically either – raising the smartphone just a centimeter above the Pad terminates the charging process. More annoyingly the Galaxy S4 will display a pop up each time you put it back on the wireless charger, which you need to click to continue using the smartphone, and there’s no option to disable that.

There’s an LED notification light at the top left corner, which blinks green when the phone is charging, and orange when you’re not doing it properly, as we described above. There’s also a start-up flashing sequence (red, green, orange) when you connect the Charging Pad to the wall charger.

In terms of connectivity, there’s just one microUSB port, where the Pad connects with a conventional wall charger (there’s one supplied in the box) to get juice. There aren’t any buttons on the Wireless Charging Pad at all, meaning getting it to work is a simple matter of plugging it in the socket. Keep in mind that not all chargers are compatible as some of the ones we tried resulting in a blinking orange light, which means charging isn’t working properly.

Designwise, the cover is identical to the regular Galaxy S4 battery cover and features the same hyperglazed plastic with special pattern that the phone boasts. However, this is where the similarities between the two end, as the Charging Cover is noticeably heavier at 21 g (the regular battery cover weighs just 8 g) and thicker. It adds noticeably more bulk to the otherwise slim and relatively lightweight Galaxy S4.

The Wireless Charging Cover gets the excess weight from its inner side. There are additional metal plates and pins that transfer the power to the 2,600mAh battery.

The dock station charges the Samsung S4 more than 2 times slower than a conventional plug-in charger, taking 3 hours and 54 minutes to bring a flat battery to full charge. That’s due to the lower efficiency of inductive charging compared to the traditional wired approach.

In comparison, plugging the Galaxy S4 directly to the wall charger via the microUSB cable takes 1 hours and 55 minutes to reach 100% battery charge.

We also tried dual charging the Galaxy S4 – simultaneously plugging it the microUSB wall charger and placing it on the Wireless Charging Pad. This method didn’t work, as the phone switched off the wireless charging in favor of the traditional charging method.

Using the Wireless Charging Pad with the Galaxy S4 might sound like a good idea at first, but the truth is this is one of the most disappointing accessories we have seen. Sure, it may look cool, but the compromises involved are too great to be worth it. For one you need to either replace covers constantly or you will have to live with a thicker and heavier phone at all times. Neither of those options is particularly great.

Charging times are also largely disappointing – using the Wireless charger will take you over two extra hours every time you need to charge your Galaxy S4. And it’s not like you can play with the phone in that time either – the Pad is so sensitive that moving it by just a little stops the charging process. The Charging Pad itself takes up space on your desk, which is not the case if you use the conventional charging methods.

And if that isn’t enough to get the idea of charging your Galaxy S4 wirelessly out of your head, you should hear about the pricing. The recommended price is $60 for the base station, and $40 for the special charging cover. Unless you’ve decided you are too cool for the traditional wired charging, you’d certainly found a few hundred better ways to spend that cash, instead of investing it into a half-baked charging method that has several obvious limitations and no tangible advantages.