Amazon attacks Apple on its homepage, compares the Kindle Fire HD to the iPad Mini

The 7-inch tablet wars just got serious. After the Nexus 7 got compared (in what I think were less than key areas) to the iPad Mini at the Apple’s event last week, now Amazon has flexed its muscle, pitting its Kindle Fire HD against the iPad Mini on its very homepage. 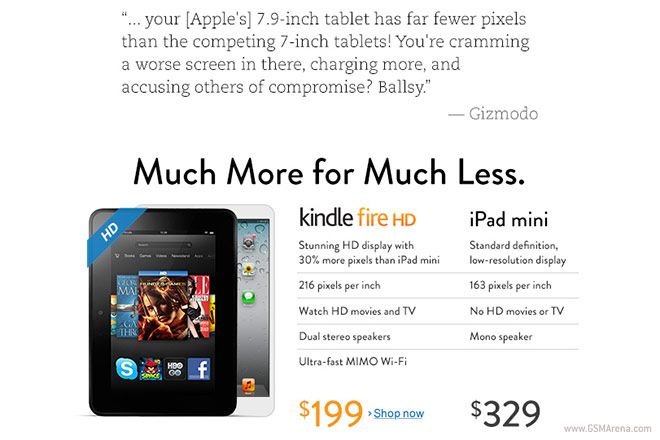 The online retailer has put up a big ad right on its homepage saying “Much more for much less” and made a comparison of its own 7-inch Kindle Fire HD against the iPad Mini, highlighting the display resolution, pixels per inch and most importantly – the price.

Amazon’s CEO Jeff Bezos looks eager not to allow Apple to steal its thunder right before the holiday Christmas season and, as demonstrated above, is prepared to do what it takes. Samsung did a similar trick with its Tab series of tablets once highlighting how its products compare to to the Amazon Kindle Fire and Barnes & Noble’s tablets, and later against the iPad 3