Alleged photos of the Samsung Nexus 10 quick start guide have popped up giving us a glimpse of the slate’s design and hardware controls layout. 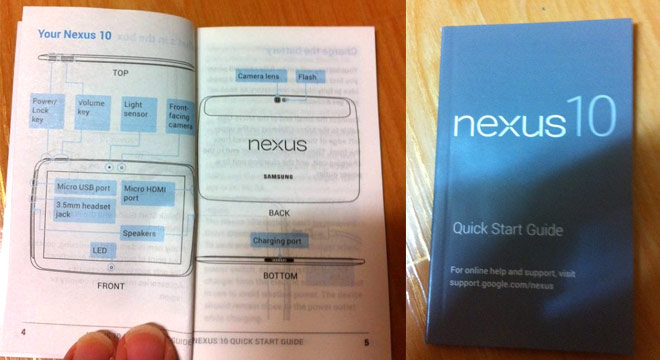 This is by far the most solid evidence of the slate’s existence after a purported photo taken with it appeared on Picasa.

Nexus 10 will be manufactured by Samsung and just like the company’s recent tablets (the Galaxy Note 10.1 and Galaxy Tab 2 10.1) features two speakers at the front. At the back, there’s a prominent Nexus logo and above the display resides a front-facing camera and an ambient light sensor.

The main camera is at the back coupled with LED flash. The rest is really not that surprising — there the usual array of power/lock and volume rocket buttons at the top and Samsung’s proprietary charging port at the bottom.

And here comes the surprising part that got us skeptical. According to the booklet, the Nexus 10 sports a microUSB and microHDMI ports in addition to Samsung’s proprietary charging port at the bottom. This doesn’t seem right, but who knows.

Anyway, the Nexus 10 is expected to be announced at Google’s special event in New York on Monday, October 29. We’ll be there and will bring you all the news as the event progresses.