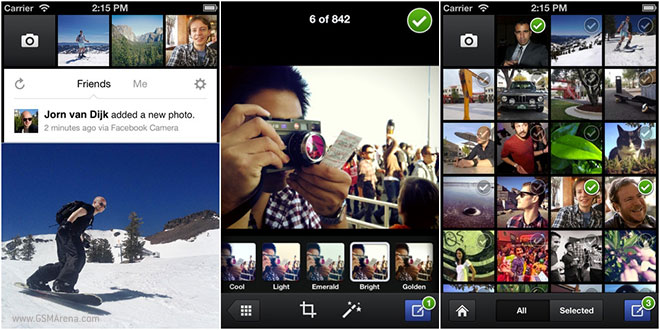 The launch of this app has come as a surprise to everyone considering it has only been a month since Facebook announced that it will be plonking $1 billion for Instagram, a dedicated mobile photo sharing service. However, Facebook Camera has a couple of advantages over Instagram.

The batch upload option is the big deal here. Whereas other apps, including the standard Facebook mobile app, only lets you upload one photo at a time, with Facebook Camera, you can click as many as you want and then batch upload them. You just have to tap the pictures you want in the photo gallery and hit upload. The app will even make a separate album for all your photos on Facebook.

Another important feature is tagging. You can tag the people in the photos through this app. Just click on their face and start typing. The app will provide suggestions from your friends list. What’s cool is that once you tag someone, all the photos within the app that has that person in them will get auto tagged thanks to facial recognition.

One of the things I liked about it is how great it looks; it is so much better than the stock Facebook app. You see full size images that span edge to edge, like in Instagram or the new Facebook mobile app. You can scroll vertically to see all your friend’s pictures and if you come across an album, you just swipe horizontally to see all the pictures inside without having to leave the timeline. This app is also much faster than the stock Facebook app.

The Facebook Camera app is free for download but is currently only available on the App Store for the iPhone. Also, as of now, it is available in very few locations, so don’t be surprised if you can’t find it in your App Store.