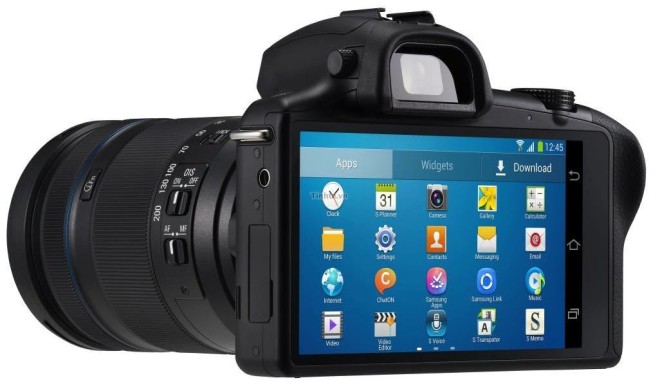 As you can see in the image above, the yet to be revealed Samsung Galaxy NX is way different from the Galaxy S4 Zoom. In terms of design, the Galaxy NX closely resembles the Samsung NX 20 – the DSLR styled member of the manufacturer’s line of enthusiast cameras.

The Samsung Galaxy NX is rumored to feature a 20.3MP APS-C sensor with support for ISO up to 25,600, and 1080p video capture. The touchscreen on the back of the camera is tipped to be a 4.3″ unit. The Galaxy NX is expected to boot Android 4.2.2 when released.

As a member of the NX family, the Samsung Galaxy NX will support the manufacturer’s range of compatible lenses. We are yet to see if the camera will be offered as body-only setup.

We will be covering the Samsung premiere event live next week. Be sure to tune in for the full scoop on the Samsung Galaxy NX.