CES 2013 tablet announcements continue to pour in, and the latest pair comes courtesy of Vizio, which unveiled pretty exciting 7″ and 10″ slates . 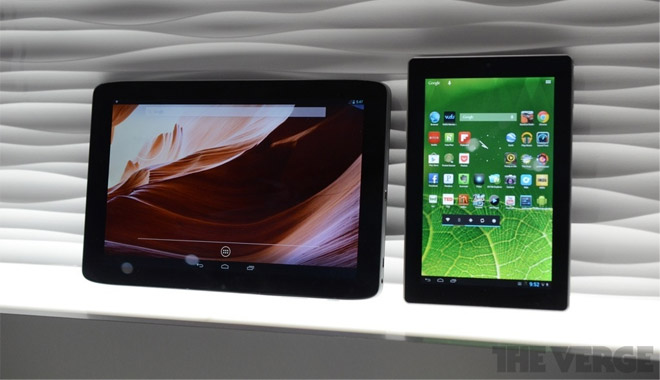 Both tablets are running stock Android 4.2 Jelly Bean with very slight UI modifications from Vizio. Most interestingly, though, the Vizio 10″ tablet is running the just announced Tegra 4 SoC.

The 10-inch display of the tablet boasts an ultra high resolution of 2560×1600 pixels, making it a direct competitor to the likes of the Samsung Nexus 10. The specs sheet goes on with 32GB of storage (microSD card slot availability hasn’t been confirmed yet), rear and front-facing cameras as well as microHDMI port for connecting to an HDTV.

In addition to the 10″ tablet, Vizio also showcased its 7″ IPS display slate with a resolution of 1280 x 800 pixels. It is packing a Tegra 3 chip (clock speed isn’t known yet) with 16GB of on-board storage and 1.2MP front-facing camera.

Unfortunately many important details such as microSD card support, amount of RAM, detailed camera information and processor clock speeds haven’t been disclosed and should be announced later on. Pricing and availability are also unclear, which is a bummer since we’d like to know if Vizio has managed to beat Google’s aggressive pricing in the segment.