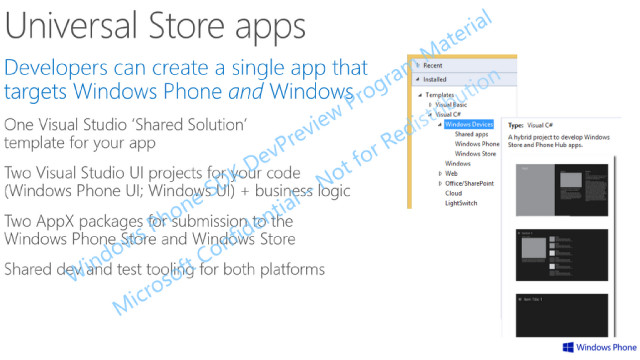 Well Twitter user, @AngelWZR has a leak that all but confirms Microsoft’s plan to implement their “Universal Applications.”

The leaked image shows a slide that tells developers they have the capacity now to create applications that work for both the Windows OS and Windows Phone devices. There’s a ‘Shared Solution’ template that developers can use, as well as shared developer and test tools for the apps, which gives us even more evidence that a unified application solution is on the horizon. 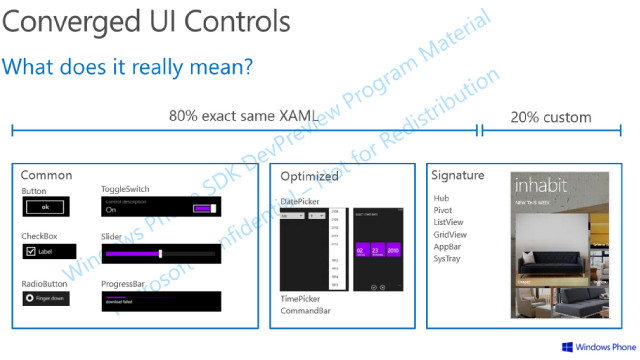 The second leaked slide indicates that a huge percentage, 80%, to be exact, of the XAML can be used across both the Windows and Windows Phone platforms. The other 20% seems to be for customizing the appearance and superficial behaviors of the applications.

We can also gather from the slides that two AppX packages are created once the application is complete. So it’s more than likely that Microsoft will do away with its current XAP packaging format.

If these sources and all of the recent murmurs are to be believed, then it looks like Microsoft is pushing harder and harder to bridge the gap between their desktop and mobile devices. It sounds like a great idea in theory, however, how will consumers react? So far, the Surface hasn’t really been working all too well for Microsoft, which was supposed to be a unified approach mobile/tablet computing. Users also aren’t too happy with the Windows 8 interface, so it may not be the best idea for Microsoft to force their tile-centric approach onto consumers.

If they can make it work, however, they will definitely be on to something. Do you think Microsoft has what it takes to unify desktop and mobile computing experiences?