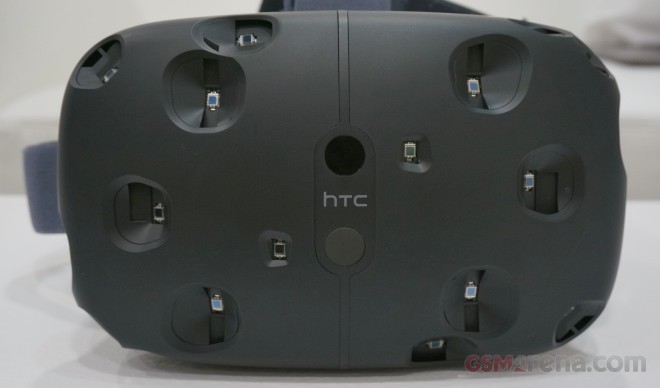 We walked around the simulated environment, exploring it freely – getting closer to appreciate the fine details or stepping back to see the whole thing. But most importantly, we got the chance to interact with it in a way that Occulus Rift and the Gear VR don’t allow you to.

With the HTC Vive headset on our heads, a pair of headphones over our ears, a set of controllers in our hands, and unable to see or hear anything but the immersive 3D demo, you would think that sooner or later we would crash against one of the demo room’s walls. But visual guides alert you as soon as you reach one of the preset virtual walls you’ve decided to be your playground.

A system using a pair of laser base stations positioned in both ends of the room is employed to allow the Vive to know where it’s at. And it alerts you whenever you reach the borders of a preset space of your choosing. The system works beautifully in the empty demo room, though we don’t imagine it to work as well in living rooms where you can bump not only into walls, but also the coffee table, the sofa, or your favorite reclining chair, for instance.

Besides the headset, the HTC Vive kit also consists of a pair of controllers, which are currently wired, but should be made wireless by the time Vive makes it to market.

The controllers, as well as the VR headset, have these small receivers, which use the laser beams to scan your body’s and hands’ position in the air and translate them amazingly accurately to the virtual environment.

The oddly shaped but light controllers are fairly advanced. They incorporate touchpads for your thumbs and triggers for your forefingers, but they also recognize the squeeze action of your grip.

The displays inside the Vive headset are not that high in resolution, but the currently employed anti-aliasing system masks that imperfections quite well. More importantly, the less than excellent image quality doesn’t take away even the slightest bit from the VR experience.

The ability to interact with the virtual environment or even create 3D drawings of light in every imaginable color is something we had never though would amaze us so much.

There was virtually no lag as we moved our body and hands through the space. And best of all, there was no eye strain and motion sickness attached to using the Vive.

We enjoyed our time with the HTC Vive and seemingly, so did everybody else we met around the HTC demo room. That doesn’t change the fact that the virtual reality experience is still in its infancy these days. There is a lot more to be desired and it will be a while before its designers successfully navigate around the limits of the technology to match the unrealistically high expectations of the spoiled users, who would expect to be wowed at every step.

We can’t quite imagine how the HTC Vive experience would translate to the ordinary living room. Commercial electronic game centers are probably better suited for hosting the HTC Vive gaming sessions as they can provide the physical room needed to make the most out of the Vive’s virtual environments and we’d totally pay for spending a few hours hooked to whatever game Valve would end up feeding to the Vive headset.