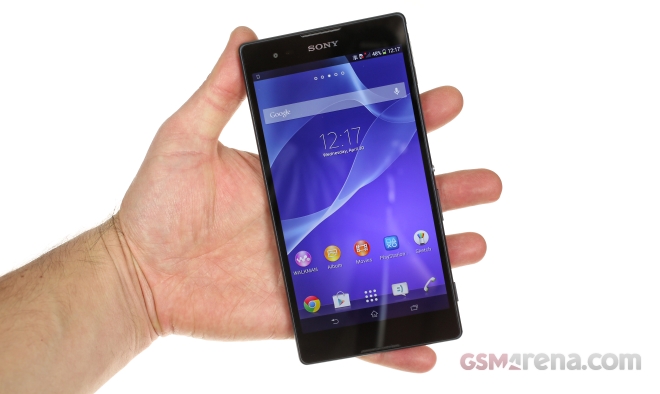 At 7.65mm, the Sony Xperia T2 Ultra is really slim despite the generous battery capacity of 3000 mAh. The only thing missing is perhaps the water-proofing Sony’s high-end smartphones have been known for.

The display side bezels are pleasantly slim. The large 6.0-inch unit only has 720p resolution, so it’s not the sharpest around, but it strives to compensate with Sony’s proprietary tech such as the Triluminous wider color gamut panel and the Mobile Bravia Engine version 2, which is said to deliver even better contrast and sharpness enhancement in photos and videos among other things.

A set of stereo speakers adorns the top and bottom on the front. The seemingly great build quality is let down by the underwhelming plastic used for the back cover. It gets smudged by fingerprints quite easily and feels cheap to the touch.

The Xperia T2 Ultra back cover is not removable. The microSD and SIM tray slots are hidden on the sides. Sony’s signature power button is also there, close to the dedicated camera key, which should tell you that the smartphone means business in the camera department. The 13MP camera can shoot both HDR photos and 1080p HDR videos and there is a handful of cool shooting modes that you may have seen on the Xperia Z line of smartphones.

The Sony Xperia T2 Ultra runs a customized version of Android 4.3 Jelly Bean and even though it’s not lightning fast, the Qualcomm Snapdragon 400 chipset seems adequately powered to handle all tasks.

Check out this quick unboxing and user interface video:

We’ll make sure to put the Xperia T2 Ultra through its paces in a proper review, so hit us up with any burning questions that you may have.