Samsung just announced its Ultimate Upgrade promo. It boils down to a price cut of $100 on the 64GB model, bringing it down to the price of the 32GB one. Double the space for the same price really sounds like a nice deal. The promotion is live now and will remain up until July 5. You do have to apply for the $100 rebate, but, the extra hustle is worth it. 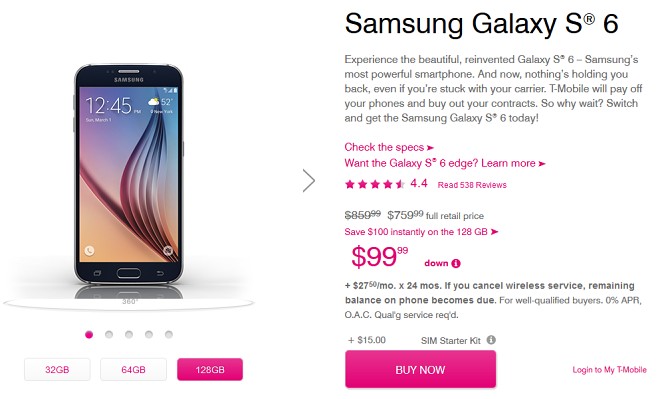 Both the Galaxy S6 and S6 edge pack a gorgeous 5.1-inch Super AMOLED QHD display, an in-house Exynos 7420 SoC and 3GB of LPDDR4 RAM. This is complemented by an impressive 16MP camera with OIS, phase detection auto focus and 4K capabilities. Of course, there is an array of other goodies as well, like LTE Cat.6, Wi-Fi ac, Bluetooth 4.1, NFC, GPS with GLONASS and Beidou, IR blaster and FM radio. The Galaxy S6 is powered by a 2,550 mAh battery, while the Galaxy S6 egde has a 2,600 mAh unit.