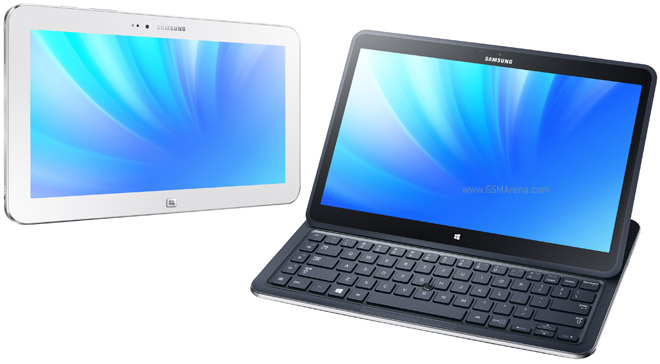 Starting up with the Samsung ATIV Q, as it is the more interesting slate of the two. It’s built around a 13.3″ display with the jaw-dropping resolution of 3200 x 1800 pixels. This results in pixel density of 275ppi, more than some not-so-old smartphones out there.

Since its a slider tablet, it supports a few lock modes: typing, floating (the display is lifted from the base), stand and writing.

It’s powered by a fourth-gen Intel Core i5 processor with Intel’s HD Graphics 4400 GPU, 4GB of RAM and 128GB SSD storage. It runs Windows 8 and can run Android 4.2.2 Jelly Bean, as well. Connectivity options include one USB 3.0 and USB 2.0 port each, micro HDMI, Ethernet port (via a dongle), and an SD card slot. The front-facing camera is capable of shooting 720p HD video.

On to the Samsung ATIV Tab 3, which sports a 10.1″ display, packing a more modest 1366 x 768 pixels resolution. It runs Windows 8 again but is powered by he Intel ATOM Z2760 CPU and 2GB of RAM. The internal storage is 64GB, expandable via the on-board microSD card slot.

The ATIV Tab 3 weighs 550 grams and is just 8.2mm thick, which Samsung claims is the world’s thinnest as far as Windows 8 tablets go. The company hasn’t provided details about the battery yet, but says it’ll be good for 10 hours of usage. There’s one microUSB and one microHDMI port as well.

Sharing the design of the Galaxy Tab series, the ATIV Tab 3 also features an improved S Pen, which is fully compatible with the Microsoft Office suite, which is preloaded on it (Home &amp: Student version).