Samsung announced that it has started mass production of 3GB RAM chips for mobile phones, after testing in late April. The chips are based on the LPDDR3 standard and are built on a 20nm process. The new chips offer better overall performance for future smartphones – potentially coming to the Galaxy Note III first. 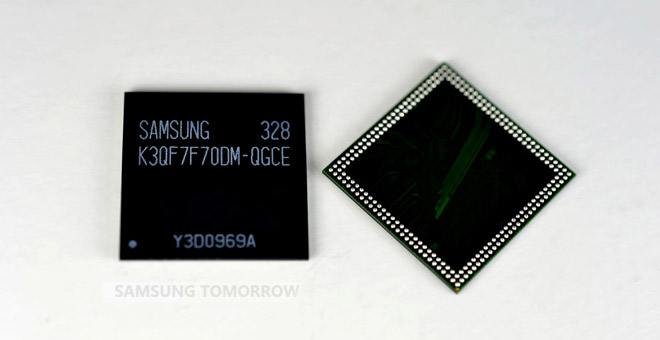 The Note III is rumored to launch with 3GB RAM and should be unveiled in early September at IFA, so starting manufacturing of the new RAM chips now seems to be just in time. Young-Hyun Jun, executive VP at Samsung Electronics, said that the first devices with this RAM will be used in the second half of this year.

The chips each have 0.5GB capacity and will be stacked three on top of each other for a thickness of just 0.8mm, thinner than current RAM chips. Two such stack will be used to achieve 3GB capacity, with two symmetrical channels linking the two stacks to the processor. The new Exynos 5420 Octa chipset has a dual-channel configuration and is the rumor mill’s pick of chipset for the Galaxy Note III.

Thinner chips means more room for the battery, but they are also more power-efficient to begin with. More importantly, they are faster, transferring data at 2,133Mbps per pin (double what LPDDR2 does). The extra space will help too – Young-Hyun Jun expects 3GB RAM to be the standard for flagships next year.