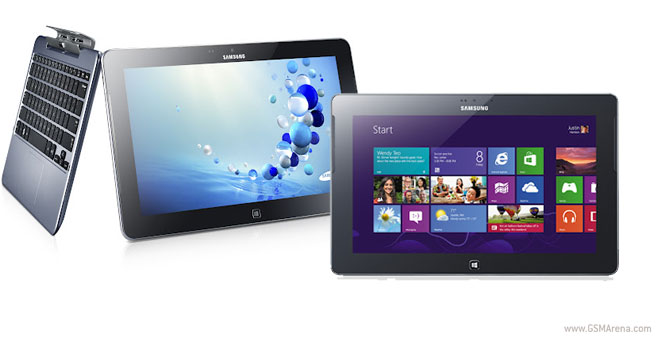 The latter duo will be coming with detachable keyboards with touchpads, just like the ASUS Transformer tablet, and S Pen-support.

We start with the Samsung ATIV Tab. It’s powered by the same 1.5GHz dual-core processor as the ATIV S, but comes with 2GB of RAM. The LCD display measures 10.1″ and has a resolution of 1366 x 769 pixels. The ATIV Tab has a very slim 8.9mm profile and weighs 570 grams, which is pretty decent for a tablet of its size. At the back, there’s a 5MP shooter, while a 1.9MP front-facing camera sits above the display.

The Samsung ATIV Tab will come with either 32GB or 64GB of storage and will offer microSD card slot with support for up to 64GB cards. Connectivity options include NFC, microHDMI, Wi-Fi 802.11 a/b/g/n and Bluetooth 4.0. With a 8,200mAh battery at the back, this slate is sure to last quite long. 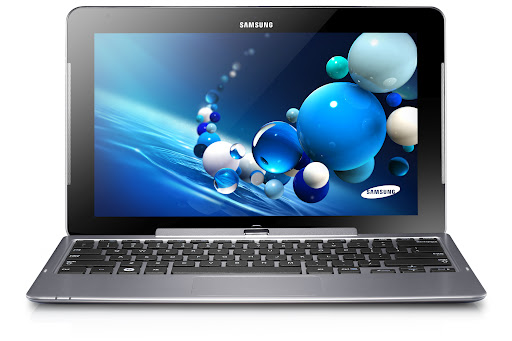 In addition, both slates come with the Samsung S Pen, which will make most of the screen’s support of 1024-levels of pressure. The ATIV Smart PC Pro sports a full HD resolution screen, while the ATIV Smart PC makes do with a display of just 1366 x 768 pixels. Both have 10-finger multi-touch support and boast 400-nits of brightness.

Designed for the less demanding users, the ATIV Smart PC is powered by an undisclosed next generation Intel Atom processor, 2GB of RAM and offers a 128GB SSD. Both slates come sans optical drives.

Both keyboard docks feature 2 x USB 2.0 ports and one mini-HDMI port for connecting to an external high-resolution display. Availability and pricing isn’t available at this stage.