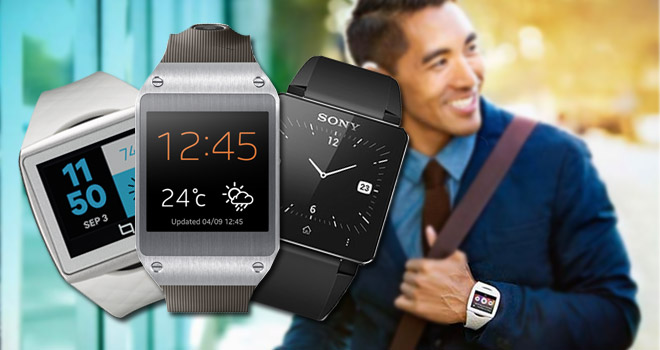 You may be thinking that smartwatches aren’t really our scope, but remember that while we are professional phone reviewers, we are also geeks. This puts the smartwatch product category right in our alley.

Okay, what makes a smartwatch tick and what is its purpose in life? It may sound a bit philosophical, but without a purpose this product niche doesn’t make any sense. Happily, those little fellas are really smart, hence their name. They are very well connected — the Sony Smartwatch 2 even boasts NFC connectivity — and all of them can connect to your mobile phone via Bluetooth.

And here’s where their wizardry kicks in. The Samsung Galaxy Gear for example can make calls on its own thanks to its built-in microphone, while its 1.9MP camera can snap 10-second 720p videos and make photos that get automatically uploaded to its accompanying Samsung Galaxy smartphone or tablet.

We admit that the Qualcomm Toq announcement was a surprise – you don’t get to see a chipset manufacturer dip its toe into a niche that’s outside its main reach. This means that the smartwatch market is a lucrative one, and that’s hardly a surprise considering their coolness factor at the moment.

Anyway, we’ve prepared a comparison table including the Samsung Galaxy Gear, Qualcomm Toq and Sony Smartwatch 2. Mind you, not all of specifications are available at the moment, so you have to bear with us as we hunt them down.

It all sounds very futuristic, doesn’t it? Being able to use your watch for a lot more than just checking the time and date. All of those three have made an appearance at IFA 2013 and all promise to be readily available at your disposal for call making, music controlling, weather checking, social network updating and what else not. Heck, the Samsung Galaxy Gear can even take pictures.

And you know what? None of this matters and here’s why. Not any of these three smartwatches can enter in a beauty contest against an old-fashioned, regular wrist watch. Yes, they are smarter and have more functionality, but their displays can’t match the mechanical, precision work of a regular watch. Not to mention their overall design. They just look juvenile, especially the Toq and Smartwatch 2. Kudos to Samsung for trying to make their Galaxy Gear look a bit more stylish with its metal face.

Then there’s the battery life. The Sony Smartwach 2 and processor, Toq can go from 3 to 5 days of low usage with their screen constantly on, but the Galaxy Gear would last even less at just 1 day. That’s the compromise needed for the fast prHow annoying is having to take your watch off every single night just to charge it up? That’s neither practical, nor intuitive unless they come up with some wireless charging solution which can sit by your bed and double as an alarm clock. We’ve accepted the need for charging our smartphones frequently, but who pampers their wrist watch.

Smartwatches may just have their evolution kickstarted by the potential they hold. Running apps and doing the aforementioned features is cool and useful, but the battery life and display quality just hasn’t caught up yet. Not to mention their performance, which sometimes can get you out of your skin.

As in everything, this is a matter of which aspects you are willing to trade off. If you value rich connectivity features and running apps on your watch more than having a stylish, durable and enduring accessory on your hand, then get either one of those three. You’ll look equally ridiculous in the street (Google Glass, I am seriously looking at you, too).