We decided to give the latest version a try and see how this 23 year old wine tastes from a new bottle.

In Prince of Persia Classic, you’re a nameless protagonist known only as the Prince, whose job is to save the life of the sultan’s daughter from the evil vizier and take back the kingdom. The game is still a 2D platformer and you control the movement of the Prince using virtual joystick controls on the left. On the right you have additional controls that can make the price jump, bend/drop down and walk (instead of running by default). During combat, the keys switch to attack, defend and to sheathe the sword.

Alright, now here’s the thing; the game sucks. Yes, you read that right. It’s terrible and that mostly has to do with the controls and everything to do with the way the character generally moves. Prince of Persia Classic is a 2D platforming game, where you will be doing a lot of jumping and climbing, so the movement of the character has to be precise to make the game enjoyable. What you get is the exact opposite of that. 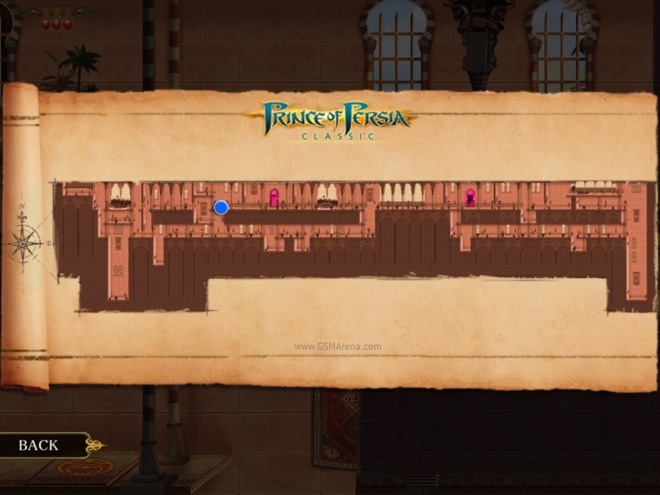 There is no precision in the movement of the character. It will be easier to control an aircraft that has lost both its wings and the engine than the Prince in this game. You can’t make him start running properly, you can’t make him stop when you want to. Half the time he just ends up running over an edge because he didn’t stop where you thought he would.

Climbing up and down is even more frustrating. The Prince’s moves are ridiculously limited, so he can only jump straight up when not moving. You have to line him up perfectly under an edge for him to grab it, not easy when you consider the aforementioned lack of movement accuracy. Climbing down a ledge is similarly frustrating. 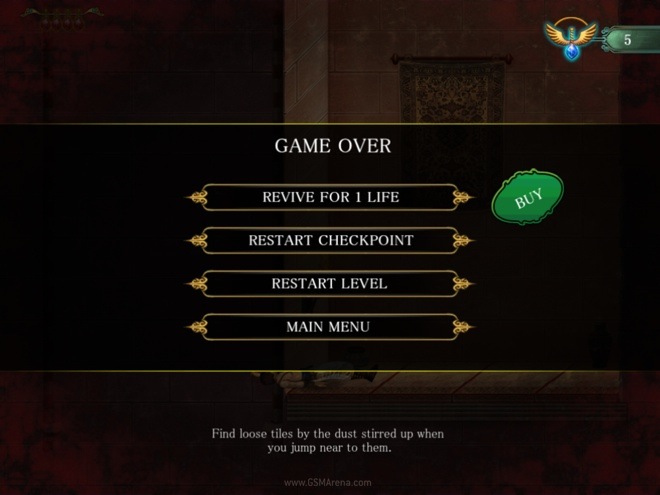 But what really annoyed me about the Prince is the slow movement. Every action you do is followed by a slow, deliberate animation that makes you feel as if you’re watching the game in slow motion. There is no urgency in the movement and the animations feel lethargic, robbing the game of the energy and making the fairly short levels seem to drag on and on. You need an incredible amount of patience to play this game and you don’t even get properly rewarded for it.

This slow, dim-witted movement and imprecise controls make it hard not to throw your phone or tablet out of the window while playing. If you read our previous review of Rayman Jungle Run, you’ll remember I mentioned that if you die in that game, it’s because you did something wrong, not because there is something wrong with the game. With Prince of Persia Classic, it’s the opposite.

You’ll die a lot, and I mean a lot in this game, and 9/10 times it’s the game’s fault. The checkpoints are also spaced far apart, so if you die you have to go through a whole lot of trouble to get back to where you were, only to die again. You can choose to respawn instantly but that’s something you have to pay for using in-app purchases. 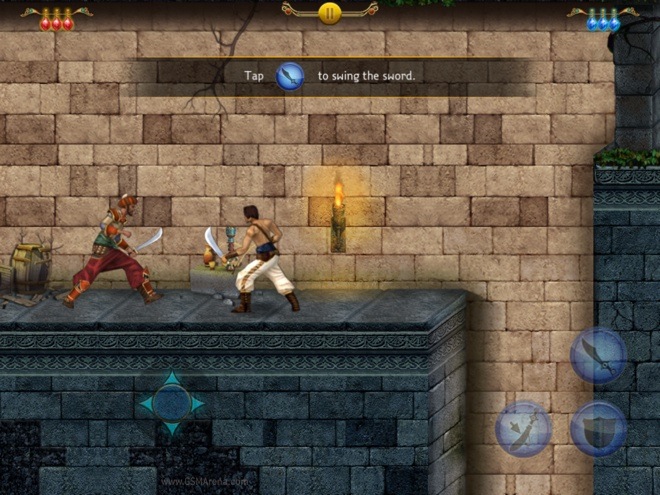 When you’re not missing gaps and falling to your death as you pull out yet another chunk of hair from your head, you will be fighting against some enemies. The enemy AI is pretty weird. At first, a couple of swings of your sword would kill them. Suddenly, two levels later the Price ends up getting slaughtered like a helpless sheep unless you block every enemy attack and time your attacks properly. This sudden spike in difficulty comes out of nowhere and makes the game even more frustrating.

The graphics received the biggest and the only upgrade over the original game. The game looks decent but the visuals are blurry on the new iPad, suggestion the game is not running at native resolution. This makes the game look only acceptable and nowhere near as great as some of the other 2D games we have seen recently, such as Rayman Jungle Run (also by Ubisoft) or Spirits. 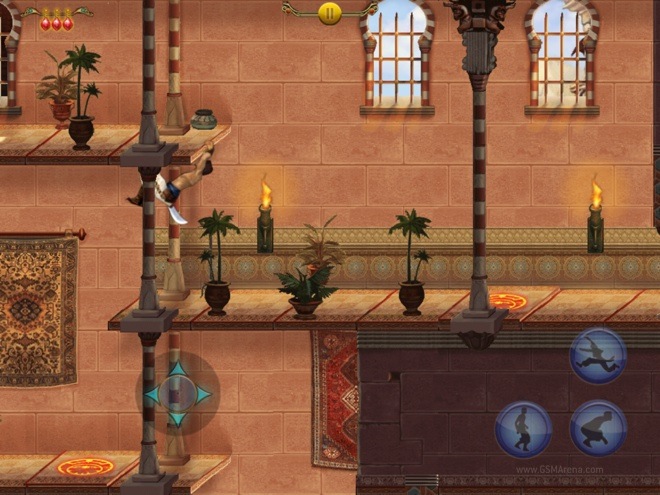 The game levels are split into multiple sections. You have one section on screen and once you reach the end of it a new section appears on screen. This made sense back in the day when the hardware had limited memory and couldn’t load the entire game at once or support continuous side scrolling but there is no excuse to do it now. The switches between sections is jarring and breaks the flow of the game. Also, you often have to make a jump right at the beginning of the next section, something you can’t see in the previous section. So you end up running straight into the pit as the next section appears on the screen.

The story of the game is told through 3D cutscene videos that feature no dialogues and look tacky at best.

There is not much of sound in the game. There is no background music while you’re playing and the only sounds are from the traps and the prince’s grunting as he moves around the place. The only music you hear is in the menus and during the cutscenes, which is passable at best.

There is no point mincing words here; Prince of Persia Classic is bad and Ubisoft should feel bad. The developers took what is one of the most loved and remembered game in gaming history and turned it into a clunky mess. I’m not even going to say that you should only get this if you’re a fan of the series. If you’re a fan, you should especially stay away from this game as it would only sour the memory of the original.

Note: There are two versions of this game on either platforms. iOS has a version for iPhone and iPod touch and a separate HD version for the iPad. On Android, you have a standard version and a free trial version. The Android version has DRM check that happens every time you start the game where it checks the game data to see if it is genuine.