Rayman Jungle Run is not the same game as Rayman Origins, even though it uses similar artwork, but is a completely new game made from the grounds up for the mobile devices with a new control mechanism. Let’s see how it stacks up against the previous games in the series.

Unlike Rayman Origins, there is no story as such in Rayman Jungle Run. Your job is to just collect all the lums in the level and if you manage to collect all 100 of them, you acquire one of Mister Death’s teeth. 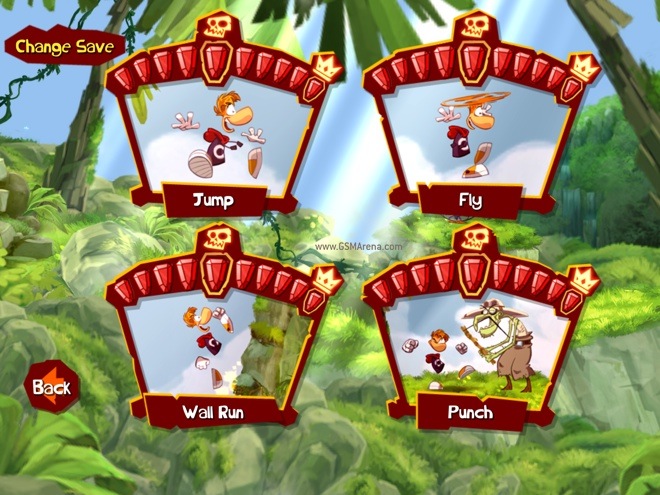 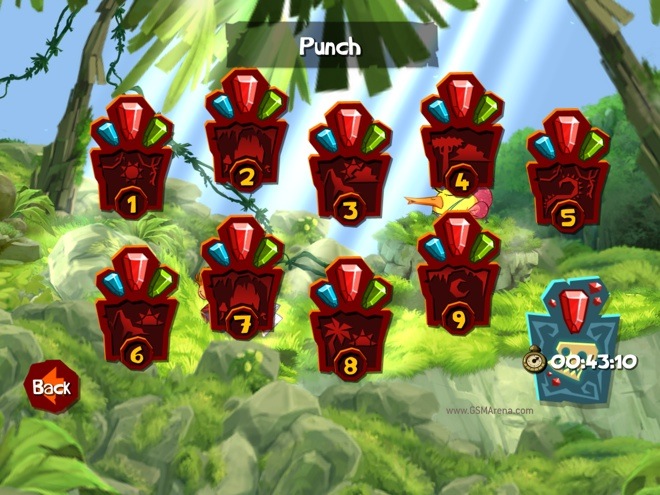 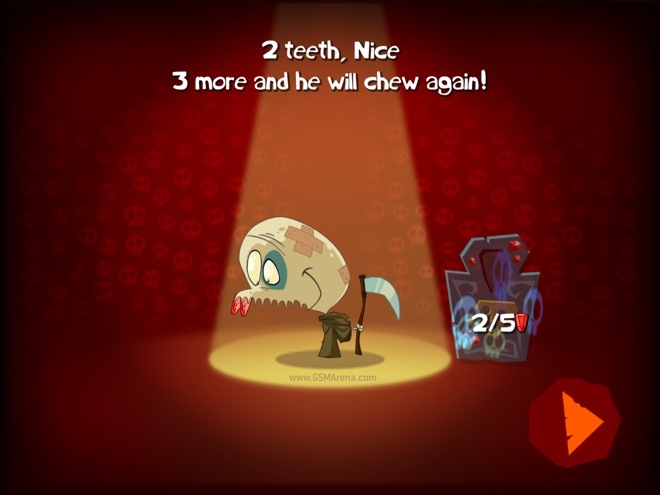 Now there are four worlds, with ten levels and one Mister Death each. If you get 100 lums in each of the ten levels in a world, you collect all ten of the teeth for that world’s Mister Death. Even if you manage to collect just five, you unlock the Land of the Dead, which is an extra super tough level in each world. Thus, there are total 44 levels in the game.

Unlike Rayman Origins, Rayman Jungle Run eschews traditional controls and gives you just one button to jump. Rayman moves on his own and you just have to touch the screen to jump at the appropriate time. This might sound simple, but it isn’t, especially when you consider there is no way to make him stop or go back. Thus if you miss something you have to play the level all over again. 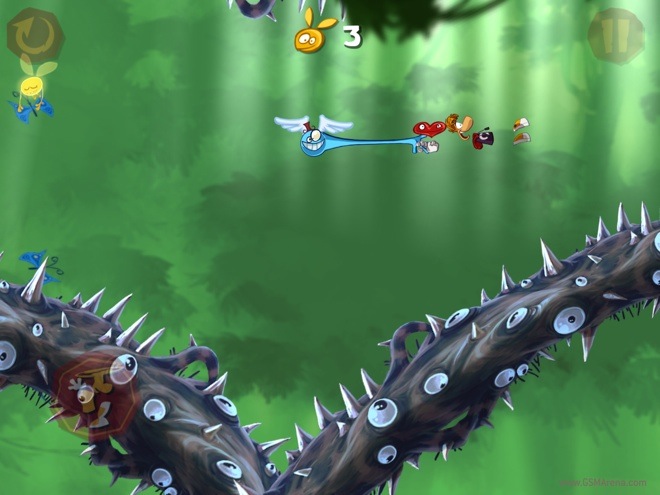 As mentioned before, there are four worlds in the game. As you complete one you unlock the other. Each one brings with it a new ability, which then carries forward in subsequent worlds. The first one lets you simply jump. In the second one, you can press and hold the screen and use Rayman’s famous ability to use his hair as helicopter blades to hover in the air. He can’t hover indefinitely but he can use air currents to boost himself and cover more ground than simply jumping. With the second level, you run up on walls. In the last world, you get the ability to punch your enemy. This is the only time the game introduces another control mechanism, so now you have two buttons to press. 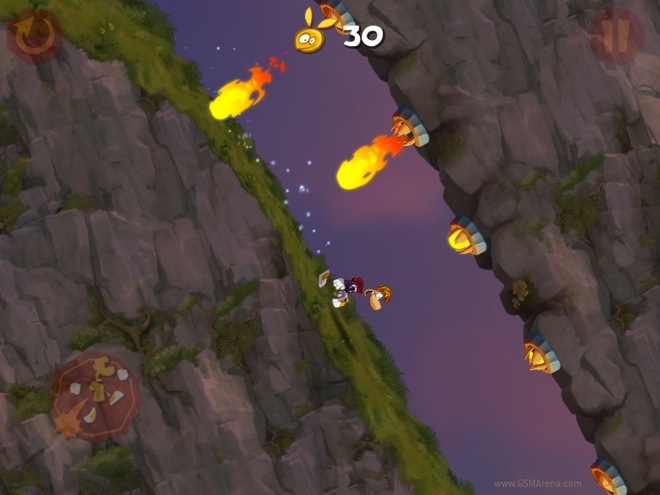 With the traditional controls gone, Rayman Jungle Run gets rid of one of the biggest headaches in mobile games: the virtual joystick. As mentioned before, however, it brings with it its own set of challenges. Because you can’t stop or turn around, you have to time everything perfectly and Rayman is not one to dawdle around, so you need to be very quick. If you miss a jump, you will fail to get the lums, which are arranged in a perfect order, an order that is only perfect if you make the jump on time. Missing even a single lum means having to play the level all over again, assuming you want to get 100% completion. Note, that it is not necessary to collect all of them but if you’re like me you will want to get all of them, just to sleep well at night knowing you got 100% completion.

Of course, the lums aren’t the only thing to look out for in the game. There are the environments and in later levels, enemies, that are out to kill you. Surviving through them with no proper movement control is a challenge in itself, but a challenge you’ll greatly enjoy. 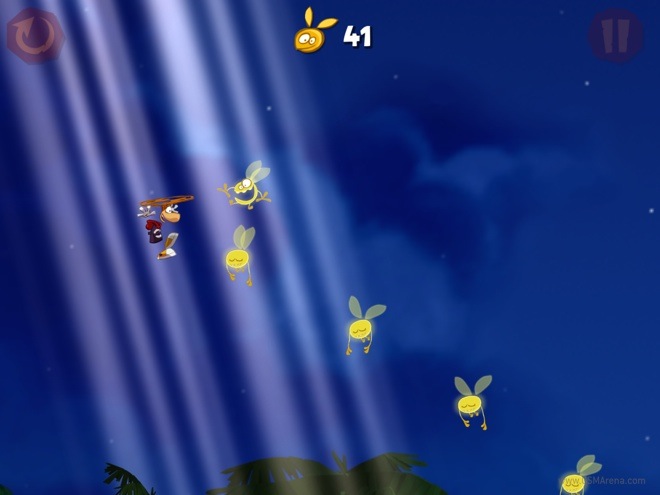 There is no denying the fact that there is a lot of repeated playing of the levels involved in Rayman Jungle Run, either to collect all the lums or just to time that jump right so you don’t end up on a vine covered in massive thorns. But not once did I found this to be an issue. The game is pretty straightforward; if you die, it’s because you did something wrong, not because there is anything wrong with the game.

Although the levels seem pretty linear where you have to stick to one path till you reach the end, the game often rewards exploration. There are hidden lums in the corner of the screens, not easily visible unless you choose to lightly stray off your course. Of course, these are not extra lums, per se. If you miss them, you will have to come back looking for them if you want 100% completion. 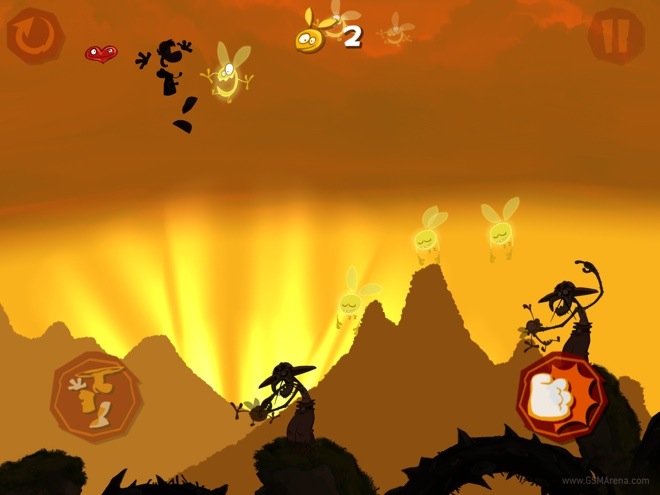 What I loved about the gameplay is its relentless pacing. Rayman does not stop so the action keeps on moving, regardless of whether you can keep pace with it or not. The game demands quick response and perfect timing and being able to pull off jumps and punches just in time feels very satisfying. Time all the jumps right, collect all the lums without dying or restarting and you will have a very wide grin at the end of the level. 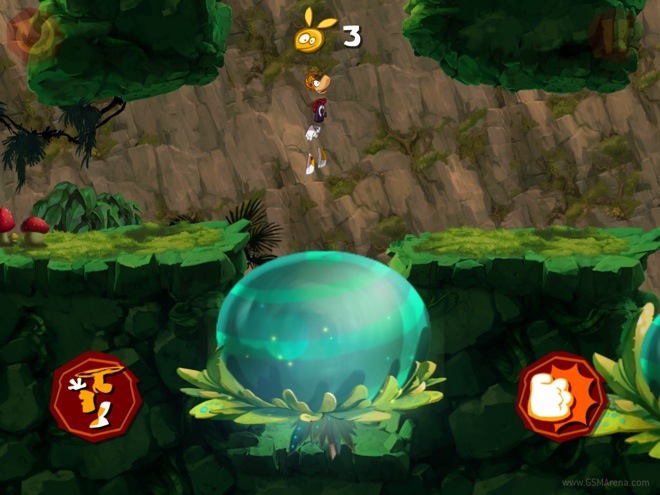 The main levels are pretty challenging as it is but then there are the Land of the Dead levels, which are almost frustratingly difficult. There are no lums to collect here. You just have to make it to the end of the level in time and the game does its best to make sure you don’t. These levels require pin-point precision and the patience of a monk on heroin to get through. There is practically zero room for error and you’ll probably end up playing each level at least fifty times before you manage to complete it. But despite this soul-crushing difficulty, the game still remains enjoyable. You will give up several times, but you will come back to have another go at it. 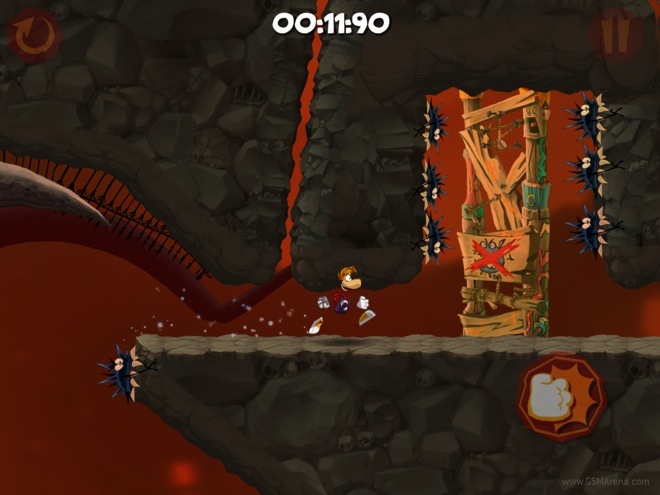 I just have one minor complaint regarding the controls in this game. In the first three worlds, you can press anywhere on the screen to jump and I had gotten in the habit of tapping on the right side. In the last world, the game assigns the punch button on the right side, so I had to adjust myself to press the left side to jump. It would have been nice if there was an option to change the layout of the keys so you don’t have to retrain yourself three-fourths into the game.

Rayman Jungle Run uses the same UbiArt framework as Rayman Origins and thus basically the same art design. The graphics are all hand drawn and look jaw-droppingly gorgeous, especially if you have the new iPad with the Retina display. The artwork is fantastic and everything is just beautifully animated. 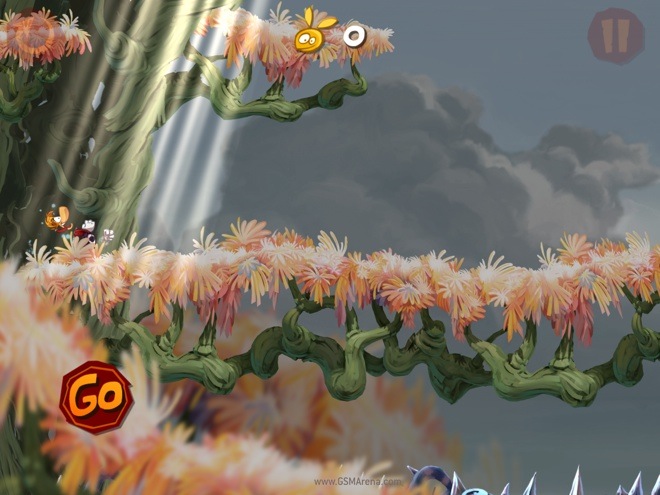 The entire world seems alive and it really is. You may find a dark spike strip in the jungle, only to realize later that it’s a creature with a spiky back. You can even see them react when Rayman jumps on them. The bulbous trampolines you bounce off of in the game are some sort of plants that glow every time you land on them. Similarly you find the environment around you constantly moving, with vines appearing out of nowhere and changing the layout of the level. 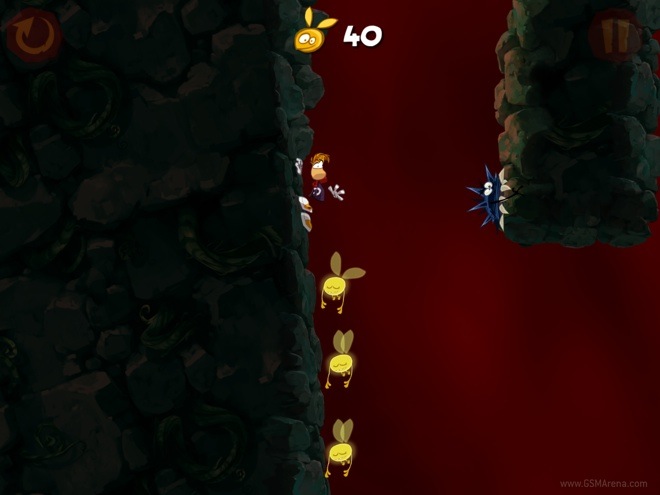 Rayman himself looks great. He is just as disjointed as ever, with no visible connections between his head, limbs and abdomen. His expressions are all wonderfully animated and he reacts to every little change around him. 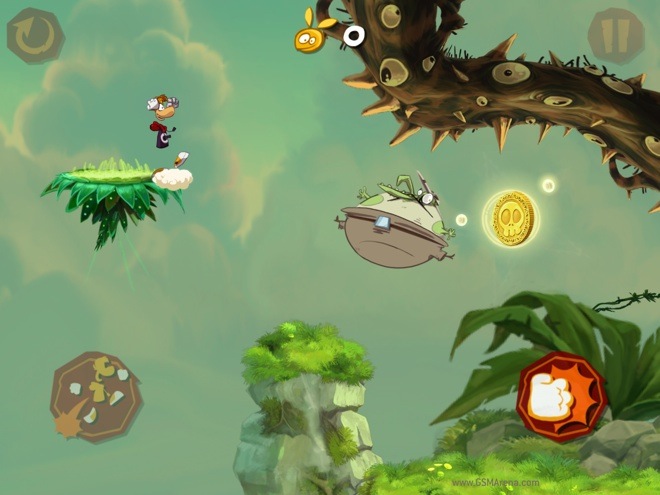 The music is also incredible. From the simple tune you hear in the game menus, the lovable background music that you hear while playing the game to the little sounds that the lums make when you collect them, Rayman Jungle Run sounds absolutely amazing.

With an incredibly fun and challenging gameplay, gorgeous visuals and a brilliant soundtrack, Rayman Jungle Run leaves no stone unturned to provide one of the best gaming experience you can have, and I’m not just talking on the mobile platform here. Rayman Jungle Run is a gem of a game and an absolute must-have for anyone with a capable smartphone or tablet. It is undoubtedly one of the finest games to have come out all year and is highly recommended.