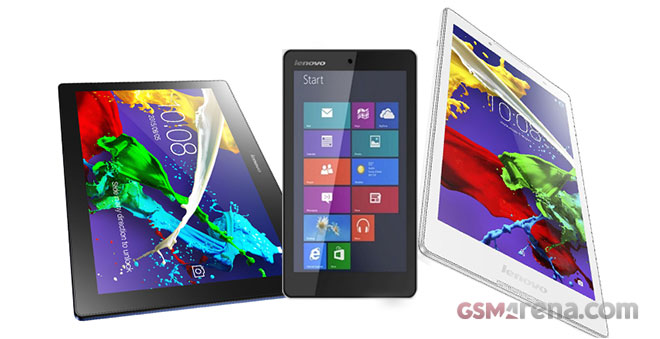 The company has been boasting its partnership with Dolby in its slates lately and the Tab 2 A10 boasts ATMOS cinema-style sound from its back speakers. That’s impressive, but even more impressive is the slate’s price of $199 for the Wi-Fi model and $279 for the LTE model. Expect the tablet to be available in April in Pearl White and Midnight Blue.

Running on the tablet is Android 5.0 Lollipop and at 8.9mm thin it too features ATMOS sound effect from the speakers. It can hold two SIM cards and weighs 360 grams. Sales start from June and the Wi-Fi model costs just $129, while the LTE goes up to $179.

Finally, there’s the Windows 8.1 running Lenovo Ideapad MIIX 300 and featuring an aluminum shell. The 8″ slate features a pretty common 1280 x 800 pixels resolution and has a 5MP camera at the back.

The tablet is powered by an Intel Atom quad-core CPU coupled with 2GB of RAM and up to 64GB of internal storage. The on-board microSD card slot allows you to expand the memory even further. Sales start at $149 for the 16GB model in July.