Intel currently has only one smartphone-ready SoC on the market, but it’s already found its way inside six phone models, the most recent (and high-profile) of which is the Motorola RAZR i. The chipset packs a single Atom CPU core (with Hyper-threading enabled) but it does lack LTE, which is a big buzz word recently (especially in the US, where the RAZR i won’t be available). 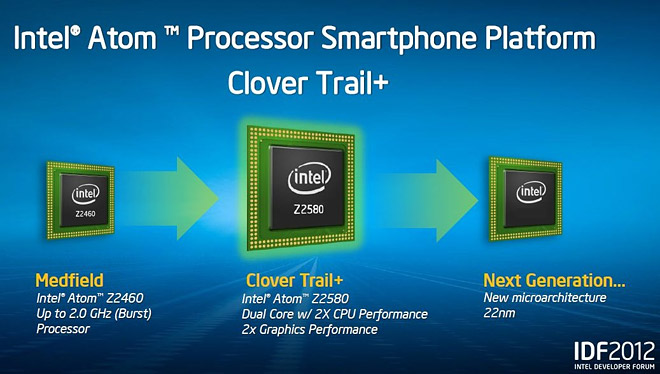 Well, things are about to change as Intel confirmed it’s developing its own line of LTE modems that will become a part of an upcoming chipset.

The SoC in question is likely the Z2580, which also features two Atom cores and a better GPU too, PowerVR SGX544MP2.

Speaking to TechCruch, Intel’s Director of Product Marketing, Sumeet Syal, explained why the company decided to go with a single-core, two-thread design first and are now moving to a two-core, four-thread processor.

Syal says that while other chipmakers are “throwing cores at the issue in terms of getting more performance”, while Intel wants to deliver higher performance through executing more instructions per clock, which is where Hyper-threading comes in.

The single-core Atom has shown very good performance against dual-core Cortex-A9 designs, so the dual-core version should catch up to the Tegra 3s and Exynos 4 Quads out there. As we saw with the RAZR i, upping the clock speed isn’t the way to go, so a second core will be welcome (though Qualcomm isn’t impressed with the Atom at all).

Intel is supposed to put out a low-end Atom SoC, the Z2000, but Syal made no mention of it and refused to talk about quad-cores.

Anyway, a more pressing issue is app compatibility. Surprisingly, the Chrome for Android browser proved to have issues running on a x86 Android, but Motorola has promised to fix it before the RAZR i comes out. Syal would only say that the “majority” of apps Intel has tested did work fine.

There are no hard dates and no hints when and what we might see come with Intel’s new SoC.