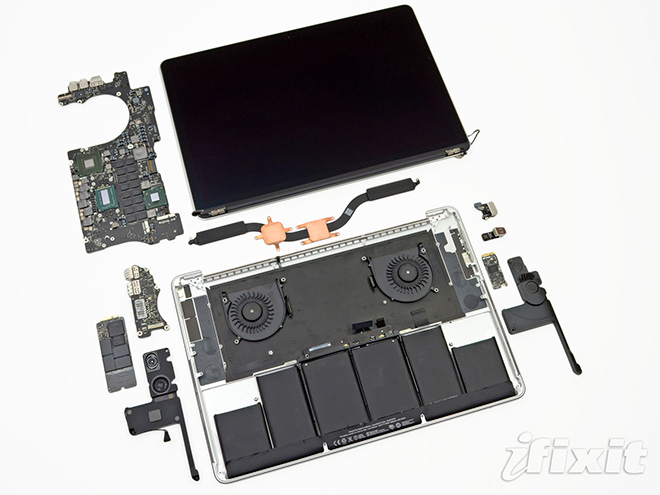 Lets’s start with the MacBook Pro, which got the lowest score a product can get when it comes to repairability. The reason for this is because a lot of the internal parts are custom designed as well as attached to the motherboard. Things like RAM, for example, cannot be removed, which is why you should be glad that it comes with 8GB from the start. If that’s not enough for you, you should configure it with 16GB while purchasing it as there is no way you can upgrade in the future.

The flash memory on the other hand is removable but it’s still a custom part so you will have to wait for replacement drives start appearing from other manufacturers the way they did for the MacBook Air if you want to upgrade in the future. Also, it’s a different module than the one in Air so they are not interchangeable.

iFixit also noted the unique cooling fans with asymmetrical spacing for the fins that Apple claims spreads the noise at different frequencies making them overall quieter.

The major problem areas are the 95Wh batteries and the Retina display that are sealed and absolutely non-user replaceable. Even iFixit who usually manage to get their way in decided to refrain from taking these parts apart in order to not damage them. The display in particular is tricky because there is no protective glass on top of it and the whole thing is sealed inside the lid, along with the Bluetooth and Wi-Fi antennas.

It’s because of this the MacBook Pro with Retina display got IFixit’s 1/10 rating in repairability. Basically, there is nothing in there that you can fix or upgrade in the future, save for the flash storage memory if an option becomes available some day. 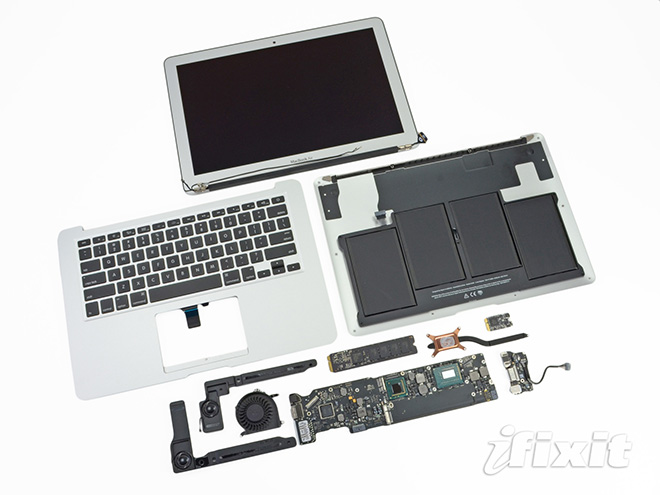 The new MacBook Air does better with a score of 4/10 but you still can’t upgrade the RAM on this, so make sure you kit it with 8GB when you order it. The flash storage memory is thankfully replaceable but Apple has used a slightly different design and connector, which makes it incompatible with older third party SSD modules. The batteries are removable as on the last year’s model. This and the option to remove a few other parts nets the MacBook Air a slightly higher score. It’s still very restrictive when it comes to upgrades.

You can check out the entire teardown in the links below.