HTC One is now official and it’s maker is hoping it will be its best chance of reclaiming the smartphone throne yet. Armed with 4.7″ 1080p display of insane pixel density, a 1.7GHz quad-core Krait CPU and a build quality like that, the HTC One is certainly in the running for the smartphone of the season. 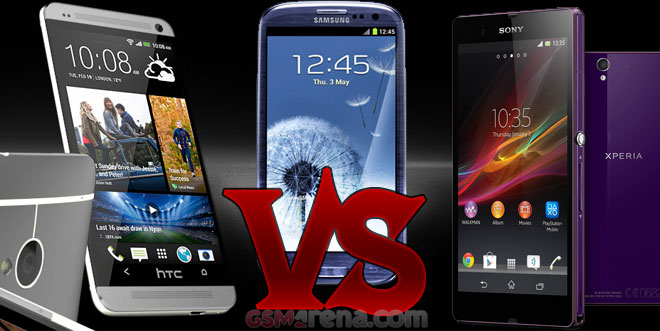 But competition might disagree and Sony in particular will be keen to point your attention in the direction of its own Xperia Z. So we decided to pit them against each other and see which one comes on top. The Samsung Galaxy S III joined the fun, too, to show how much smartphones have evolved for the better part of a year.

Check out the quick comparison table we’ve glued together below. 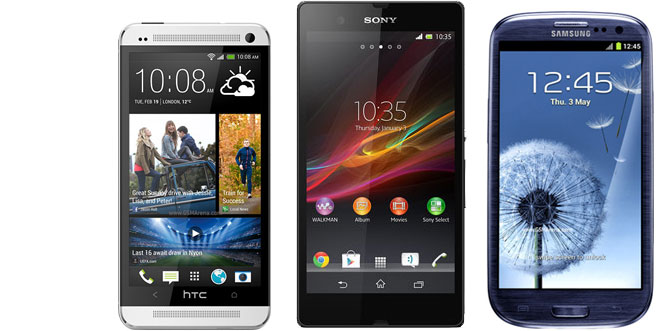 2013 is all about cramping maximum number of pixels on a smartphone screen, resulting in a display so sharp it looks like a painting. Sony first managed to bring its FullHD resolution handset to Europe, but the Taiwanese are quick to catch up and One even exceeds the pixel density of its competitor.

On the processing side, things are somehow identical. Both 2013-announced flagships are powered by a Krait processor, built on a 28nm manufacturing process. However, HTC have one-upped Sony by fitting the One with the more recent Snapdragon 600 chipset boasting Krait 300 CPU clocked at 1.7GHz, instead of Xperia Z’s 1.5GHz.

When it comes to the smartphones’ cameras, HTC relies on a 4MP Ultrapixel snapper with larger pixels, a bright F/2.0 aperture and Optical image stabilization, which should result in amazing per-pixel quality and low-light performance. The Xperia Z, on the other hand takes the traditional approach and brings a 13MP camera, that should have an advantage in well-lit environments, but might not do as well in the dark.

The Samsung Galaxy S III is lagging just about everywhere, which shows how rapidly things are improving in the Android smartphone world. It hasn’t even been a year since the most popular Android smartphone so far launched and it has already looking like a device from another era.