Hawaiian Airlines will start using iPad minis as an alternative to (and eventual replacement of) its existing in-flight entertainment system on all of the company’s Boeing 767-300 planes. 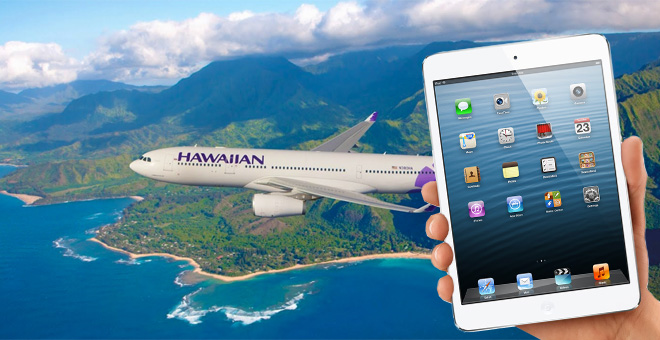 The company plans to roll the portable Apple tablets starting September 1 and plans to deploy 1,500 iPad minis to 14 airplanes, which serve 14 routes between the US and Hawaii. This makes Hawaiian Airlines the first US airline company to deploy Apple tablets on board. Helping the airline company is Bluebox Avionics, who are bringing the slates on-board and integrate them with in-flight entertainment software.

The Apple iPad minis will pack 100 hours of the latest Hollywood movies, television shows as well as many games. The tablets will be available to use for free to everyone in the Business Class, while the passengers with an Economy ticket would have to dish out $15 if reserved at departure gate or $17 if opted in-flight.

American Airlines, another US airlines, has been yet another company to offer tablets for in-flight entertainment. However, it’s offering Samsung Galaxy Tabs 10.1″ and they are available to those purchased a ticket for a premium seat.