Google Nexus 7 available in the Netherlands, Italy and Japan, on pre-order in Taiwan

The availability of the Google Nexus 7 tablet continues to expand. Last week France, Germany and Spain got it, now it has reached Italy and the Netherlands too. It’s also cropping up halfway across the world in Taiwan and Japan too. 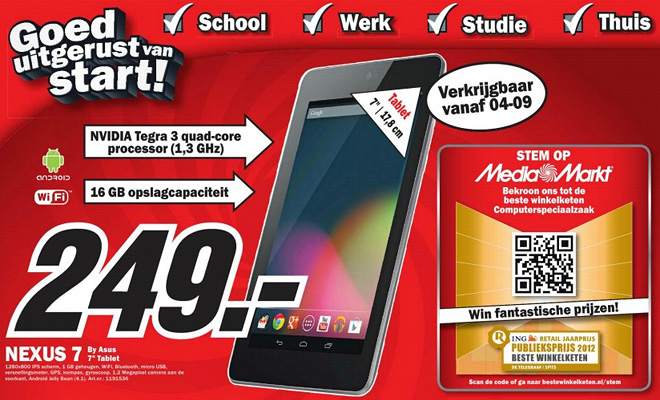 People in the Netherlands can grab a Nexus 7 16GB for €250 right now (16GB/€250 is the deal other Euro countries got too). We only managed to find the deal in a MediaMarkt brochure, but if you find it elsewhere, we’d appreciate a link.

Update: Dixons Netherlands also have the Nexus 7 16GB and will be shipping it in 10 days (or longer). Then there’s BCC, who promise a home delivery within two weeks. Thanks, Miquel!

MediaWorld Italy (which is part of the same chain as MediaMarkt) also has the 16GB tablet in stock for the same price. The Italian Asus Store on the other hand has the Asus-made tablet on pre-order with September 17 listed as the expected shipping date. Fnac.it is taking pre-orders with a September 14 shipping date.

Thanks to Orhan for the tip!