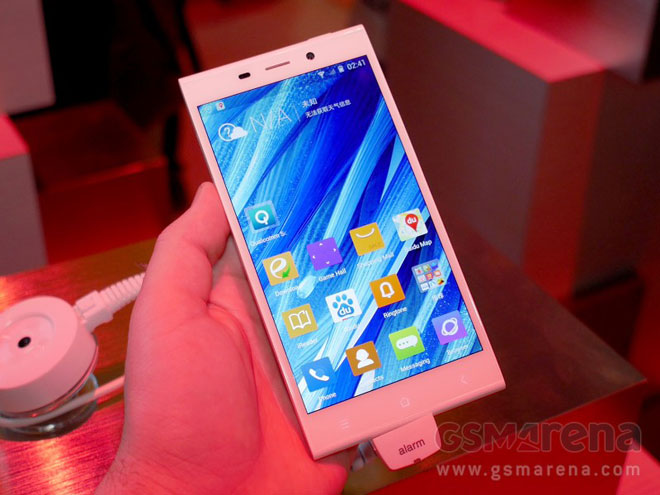 That’s why we were eager to pay the Gionee both a visit and see for ourselves what the phone is all about. The phone itself was announced at the end of November last year and its CES 2014 appearance marks its US debut, which is in line with the company’s plans for distribution outside China in early 2014.

Anyhow, let’s start with the exterior of the Elife E7. It’s built around a 5.5″ TFT LCD display made by Japan Display Inc. (created by Toshiba, Hitachi, Sony and INCJ). With 1080p resolution the screen is quite sharp, having a pixel density of 400ppi. On top of it lies a sheet of Gorilla Glass 3 for extra scratch resistance and shutter protection. Overall, it’s a very good display that we liked at first sight. Colors look good and viewing angles aren’t too bad either.

Below the display we find the Android trio of capacitive buttons, which could’ve been better lit up, but that’s just our personal preference talking. The Elife E7 is made of plastic, which feels nice in hand. It’s a glossy kind of plastic, which means it packs astonishing fingerprint picking capabilities, so it’ll need to be wiped more often than not. Nevertheless, it feels very sturdy and solid when held in hand.

As far as the Elife E7′s profile goes – at 9.7mm thick the smartphone feels notably thicker than most of its flagship rivals, but it’s not too bad as to be unbearable. Plus the extra thickness has enabled Gionee to put the most powerful version of the Snapdragon 800 chipset inside – the MSM8974AC, which has its quad-core Krait CPU running at 2.5GHz. It also packs an Adreno 330 GPU and 3GB of RAM.

The phone runs Android 4.2.2 Jelly Bean with a special UI that Gionee has called AMIGO 2.0. As a result, there’s a wide range of customized applications and widgets. Despite the additional weight that AMIGO 2.0 has added, the phone flies and doesn’t think twice about anything you throw at it.

Sadly, the 32GB of internal storage (for the 4G LTE model) aren’t accompanied by a microSD card slot. There’s more bad news when we move onto the back – the 2,500mAh battery isn’t removable.

On the flipside, the 16MP autofocus camera with LED flash promises to be quite the shooter. Its sensor is quite large, allowing for 1.34µm pixels even at this resolution – higher than what we’re used to seeing in most flagship phones out there. The primary lens is based on the Largan M8 solution and is said to deliver sharp images. Unfortunately, we were unable to snap a few photos and check out the quality for real.