Back in the summer, a leaked slide hinted when we should expect the arrival of the upcoming Tegra 4 chip from NVIDIA, and today more information regarding the SoC itself surfaced. 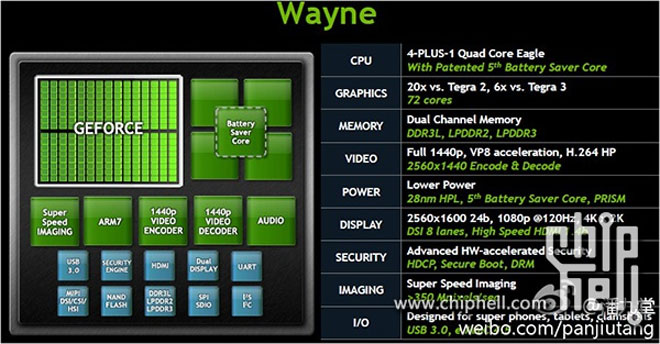 According to it, the Tegra 4 Wayne chipset is going to boast a mighty GPU with 72 cores. You read that right, 72.

The CPU is tipped to house four ARM Cortex-A15 cores. It’s highly likely that NVIDIA is going to carry over its 4-PLUS-1 technology in the Wayne chip as well, adding additional core for trivial user interface actions, and thus saving battery.

The Tegra 4 will also come with support for USB 3.0, dual-channel DDR3L memory and a high-performance imaging chip.

More information is expected to be unveiled at CES in January next year, with the chip getting cozy in end-devices several months later.