But you won’t be doing any flinging in this game. Other than the main characters of the game, Bad Piggies shares nothing with Angry Birds and is a complete departure in terms of gameplay. We decided to take a look and see just how bad the piggies really are.

The pigs are making plans to capture the eggs from the birds. Unfortunately, the plans were blown away by the wind and the pigs have to get them all back. They have some objects at their disposal and your job is to assemble a vehicle to transport them to the plans. 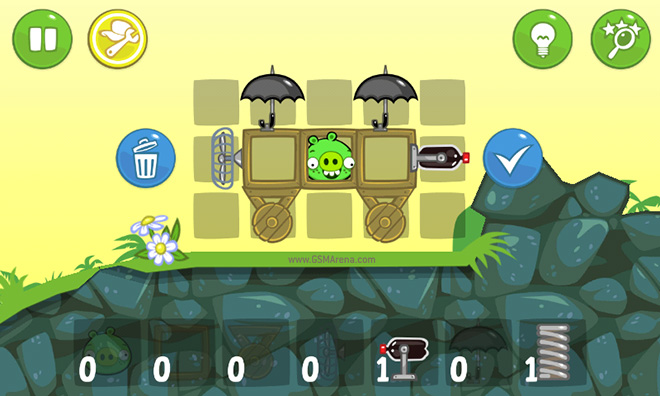 The object include boxes, wheels, rockets, balloons, TNT, umbrellas, etc. Each of them have a specific purpose. The boxes form the frame of the vehicle and everything has to be attached to them. The wheels, of course, facilitate motion. Propulsion devices, such as fans, rockets, bellows, soda bottles, etc. help propel the vehicle to make it go faster or climb up a slope. Umbrellas act as your brakes. Balloons lift the vehicle and sandbags weight it down as long as you want. TNT, when denoted correctly, lets you shoot the pig in a particular direction and achieve greater height than otherwise would be possible. At times you get objects such as motors, that don’t do anything on their own but combined with something like the fan makes the vehicle move faster. 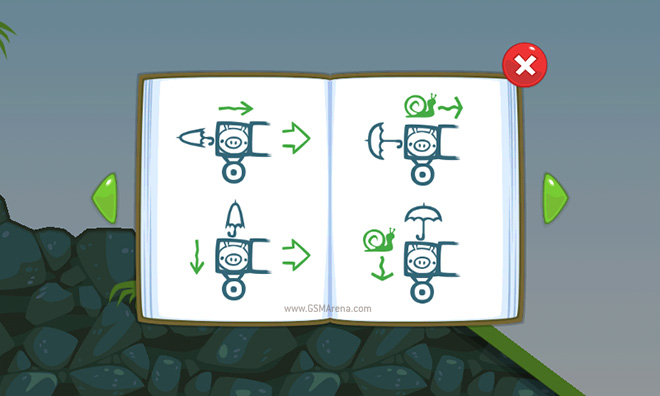 You can access the in-game tips to see how you can use the objects you have at your disposal. Once you assemble the vehicle, you hit the button and the level begins. Depending upon the objects you have, you get buttons on screen to activate or deactivate them. You can, for example, switch the fans on or off, open or close the umbrellas or pop the balloons as required.

There are multiple goals in the level but the main one is always the plans at the end of the level. You need to get there to finish the level and for other achieved goals to count. Other goals include stars that you can collect, reaching the plans before the timer runs out and not using a specific object in a level.

Unlike Angry Birds, you don’t have to collect all stars at once. You can, for example, choose to finish the level before the timer runs out thus getting one star for it, plus one more for finishing the level. After that, you can replay the level and instead of having to finish it in time, you can go after the stars that might be scattered across the level. Once you finish the level with the stars, your previous star for finishing the level on time stays and you also get a new star for collecting it in the level. This way you can collect a maximum of three stars per level. The more stars you collect, the more levels you unlock in the game. 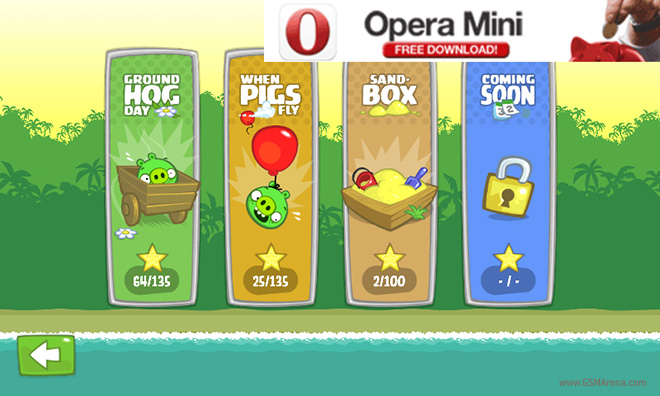 There are three modes in Bad Piggies. The first is ‘Ground Hog’, where you build vehicles that stay on the ground. The second is ‘When Pigs Fly’, that involves building flying vehicles, consisting of balloons, wings and propellers. The third is ‘Sand Box’, where there are no plans to collect but just to build massive contraptions that can go across the enormous levels and collect all the stars.

So how is the game to play? Well, it’s a bit slow and takes a while to become truly interesting. The initial levels are fairly easy and not very interesting. You need to spend some time with the game and unlock more objects before you get involved in it. Once more objects get unlocked the levels start becoming more and more fun. Eventually you will find yourself playing the levels again and again to get all three stars. 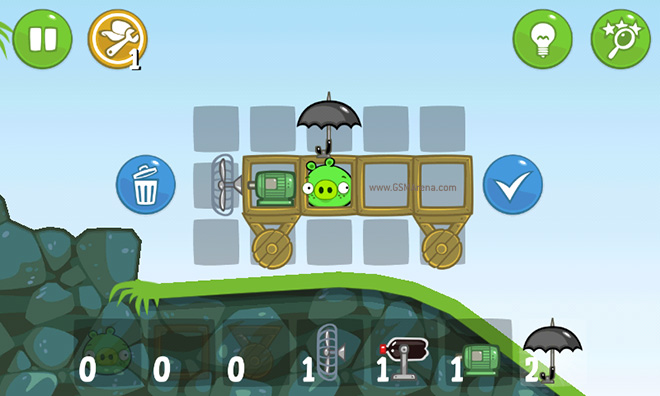 Assembling the vehicles can be fairly challenging. You have to take into consideration the objects you have been provided, the grid in which you can arrange them and the terrain you will be traversing. Needless to say, there is a fair amount of trial and error involved and you will find yourself building and refining your designs again and again until you find one that gets the job done. In many of the levels there is no one particular way that you can build a vehicle. You could place things differently and still get similar results.

You can’t get too creative with the positioning, though. The game relies heavily on physics and the placement of each object has repercussions. Place everything on one end of the vehicle and you will unbalance it, making it tilt on slopes. The propulsion objects need to be placed such that they all fire in one direction and they shouldn’t all be on one side or the vehicle will spin like a top in one place. Once you grasp the physics of the objects and know what each does, building the vehicles becomes relatively easy. 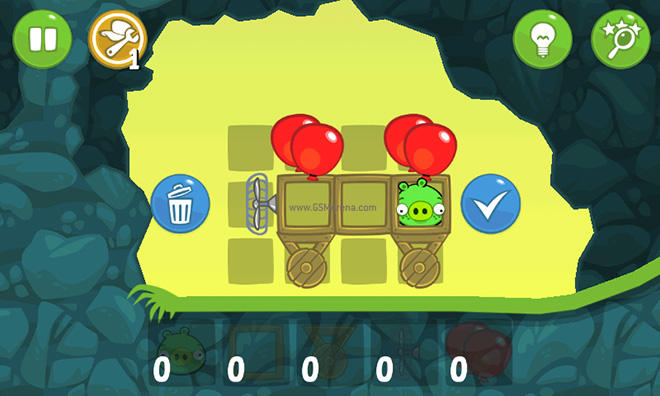 If at all you do get stuck, the game helps you out by building the vehicle for you. You will still have to control it yourself after you start it but that’s the easy part. You can use the game’s help three times and if you want more you will have to purchase them using in-app purchasing.

Speaking of pricing, the iOS version of the game costs $0.99 on the iPhone and iPod touch whereas the iPad version costs $2.99. On Android, there are two versions, with one being optimized for HD displays, and both are free to download but have in-game ads that burn through your battery and look ugly. Unfortunately, there is no paid option available on Android at all, so even if you want to you can’t get rid of the ads.

Bad Piggies feature the same visual style as Angry Birds, which is understandable as it comes from the same universe. However, while the Angry Birds visuals were filled with many objects and characters, the Bad Piggies world looks barren and desolate. This further adds to the general lack of excitement you get while playing the game, as you transport a lone pig through an empty world with nothing but the sound of the contraptions and the odd squeaks of the pig to keep you company. The game could have used jazzier environments to spice things up and look less drab.

The music in the game is pleasant but nothing that particularly stands out. There are couple of themes that play while you’re building your vehicles and another that plays once the level starts. The former is calm and engaging whereas the latter is fast and exciting. They get the job done but again, could have been better.

One of the best things I liked about Bad Piggies was that it wasn’t Angry Birds. That game was fun two years ago but has started getting long in the tooth and honestly, I doubt I can sit through another variant of that game. So kudos to Rovio for making a game from the same universe but without the same gameplay.

On its own, Bad Piggies is not all that bad and offers a fairly enjoyable experience. Its drawbacks are that it’s not particularly exciting, especially during the early levels and that itself could put off many people who wouldn’t go further from that point. Also, it lacks the pick up and play nature of Angry Birds, which is not a bad thing, but not a lot of people would want to spend time and mental energy thinking of the perfect vehicle design to get all the stars in the level. In Angry Birds, you can senselessly fling birds at the pigs and although you wouldn’t many stars you’d still finish it and go to the next one. That does not happen here. Even to finish the level you have to be fairly good at the game.

Lastly, the game is packaged in a dull wrapper, with boring visuals and a passable soundtrack that don’t do justice to the gameplay.

Eventually, you end up with a game that you really wanted to play but can’t go beyond a few levels. Especially when there are so many other good games to play out there.

Note: We have only talked about the iOS and Android version here but an OS X version is also available. Moreover, the game is coming soon for Windows and Windows Phone 8.