The game is based upon the popular The Incredible Machine series of games for Windows desktops. This is what you have to do: every level has several fixed objects arranged on screen in a particular order. You also have extra objects available at your disposal that you can place at various points on the screen. The goal of the game is to use all of these objects to set off a chain reaction and move certain objects to a designated position. 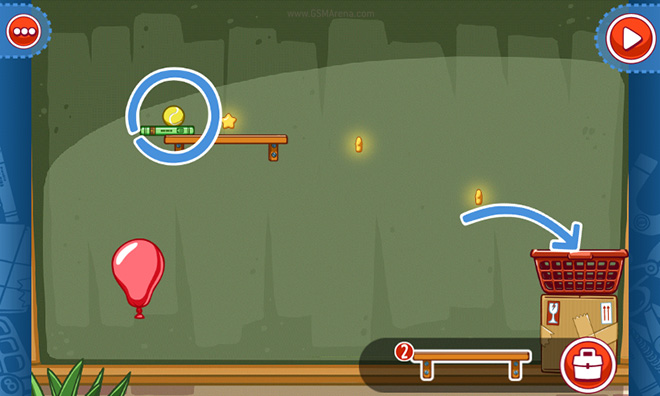 For example, you will be required to move a ball from one location to a basket kept in another location. You will need to create a path, using the objects on screen and the extra objects given to you, and direct the ball towards the goal. 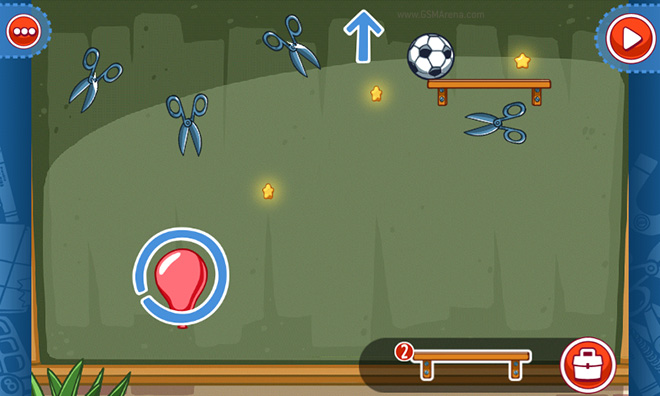 In the early levels, solving these puzzles basically requires placing the extra objects given to you to fill out the blanks. The in-game hints tell you where to place these objects and in what positions. Other than being able to move around, you can also rotate the objects so they are pointing the right way.

However, as the game progresses, you will find out that there is no fixed place for these objects and that’s where the beauty lies in this game. You can use the provided objects anyway you want. You don’t even have to use all the objects. This gives the game less of an “on-rails” feel unlike some other games, where there is only one solution, and more freedom for you to go about doing things whichever way you please. 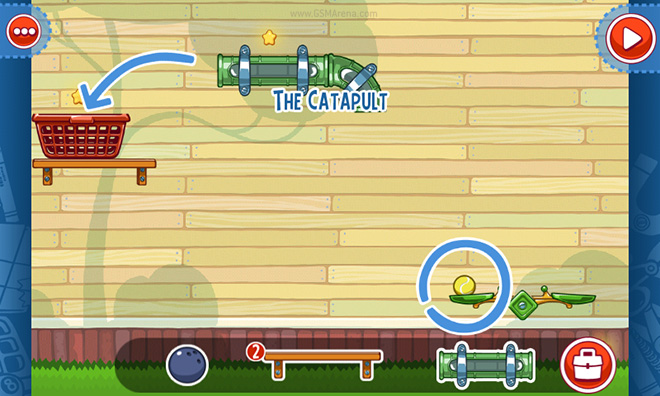 The game has a start/stop button at the top of the screen. When you think you have placed everything in the right place you press the start button and set the mechanism in action. In some levels, the activators are already in place and frozen, so when you start the level they move and set the mechanism in action. The activators can include something like a ball that is floating in mid-air and falls as soon as you start the mechanism. In these levels, you have to arrange the objects according to the location of the activator.

In other levels, the objects, at least some of them, are in position and you have to plant the activator that will set off the mechanism. This can include something like a balloon that will float up and push something or a ball that drops on something and presses a button. 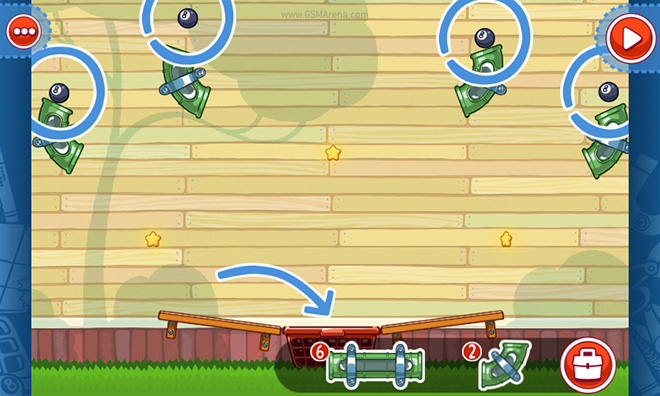 Once you activate the mechanism, you can sit back and watch the whole thing work itself. If you placed everything correctly, the objects will land in their desired position. If not, you can restart the level and correct where you went wrong. One good thing about the game is that restarting at the end of level does not destroy your arrangement and it continues from the last placement so you can tinker around with it and make it work properly without having to start all over again. 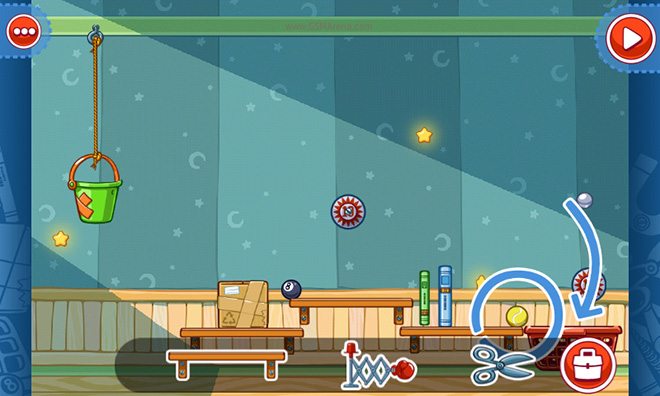 There are also stars to collect on every level, three to be precise. The perfect mechanism has the moving objects touch all the stars (and thus collecting them). Get all three and you have a perfect score. You don’t have to collect the stars. In fact, the game is a lot easier if you ignore them, just like, say, Cut the Rope. But then, what’s the fun in that?

I loved the physics in this game. The bouncing of the balls in general was done very well and looked completely natural. The physics in the game makes it more challenging because then you have to factor in the way the objects will move after they land and adjust your objects accordingly.

The current version of the game has 100 levels but here’s the best part. The game also lets you create your own levels. As you play the game you unlock more objects, which you can use to create your own levels. To create a level, you first have to create a puzzle with three stars. The mechanism, when once set in motion, should cause the moving object to collect all three stars. Once you manage to do that, just remove some of the objects (thus turning it into a puzzle) and your level is ready. 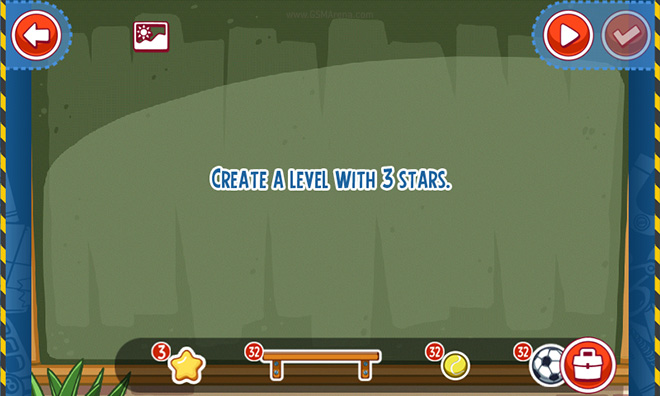 Once you are done creating a level, you can upload it to Rovio’s website through the game. The level is then available for others to download and play. Alternatively, if you are not much of a creator you can download levels created by others. It’s hardly been three days since the game came out and there are already thousands of levels available for download. 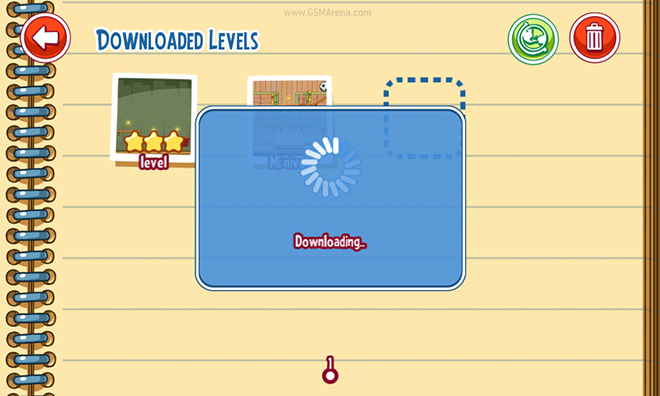 As for flaws, I had some difficulty in arranging the objects on the screen. On small screen smartphones, touching an objects ends up covering it entirely, which makes it difficult to see where you are placing it. It’s also a bit annoying to rotate them. You have to tap them to get the rotating circle around them and then precisely rotate them to place them in proper order. This is a lot harder than it sounds and can be frustrating on devices with small displays. Those playing on a tablet probably won’t have this issue.

I also found the difficulty curve a bit steep. The transition from telling you exactly where and how to place the object to solving complex puzzles all on your own is rather short. The game doesn’t even have any kind of hint system like Machinarium, where if you are hopelessly stuck the game will give a clue to help you out a bit. Make no mistake, this is a complex and challenging game and not something you can finish in an afternoon.

Amazing Alex is currently available for iOS and Android but a Windows Phone, Windows and OS X version is said to be in the works. The iOS version comes in regular and HD (for the iPad) flavors for $0.99 and $2.99 respectively. The Android version comes in three versions. There is a free version that offers a handful of levels to try out the game. There is the regular version for $0.99 and there is an HD version for $2.99. The HD version is supposedly for devices with HD display but having tried both versions on an HTC One X I found absolutely no difference in the visuals at all, with the standard game scaling perfectly to the high resolution screen. If you have an Android tablet, try out the standard version first to see if it looks fine instead of spending thrice on the HD version.

Overall, I’d say this is a great game for those who enjoyed the original The Incredible Machine series. Underneath that lighthearted music and the Disney cartoon-style graphics lies a fairly complex and challenging game that will give a nice workout to those brain cells. And if you somehow manage to complete all the levels, there is more to play in the form of downloadable levels and the option to create your own for the Rube Goldbergs among you.

Rating: 4/5
Pros: Challenging gameplay, ability to create and download custom levels
Cons: Moving objects on the screen can be frustrating at times, no hint system and difficult levels make it all too easy to give up on the game