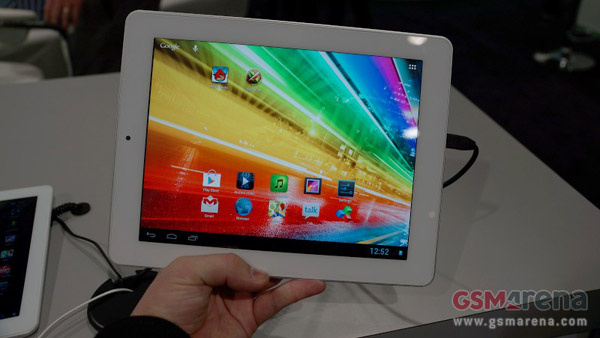 And if the quad-core processor and Retina-like display didn’t sound great already, the Archos 97 Platinum is going to retail for the very un-Apple-like $329. Sounds like a great deal indeed.

With such price, however, you have to sacrifice something and in the 97 Platinum’s case that’s the build quality. The slate doesn’t feel too bad in your hands, but the lock/power and volume rocker buttons feel really cheap.

There are two 2MP camera at the front and back of the slate. We think Archos could have saved the trouble of placing a main camera at the back and slash the price even further. Built-in storage is quite limited at 8GB, but luckily it’s expandable via the microSD slot.

The Archos 97 Platinum is expected to hit US and Europe shores in March.