An untethered iPhone 5, iPad mini jailbreak may be finally launching this weekend

Ah, the iPhone 5 jailbreak is an unfulfilled dream of many, but it’s still as elusive as ever (the iPad mini one, just as well). Or are they? An independent dev group, which calls itself the Evad3rs, claims to have a jailbreak solution almost ready for the masses – called Evasi0n – and it should launch this very Sunday. 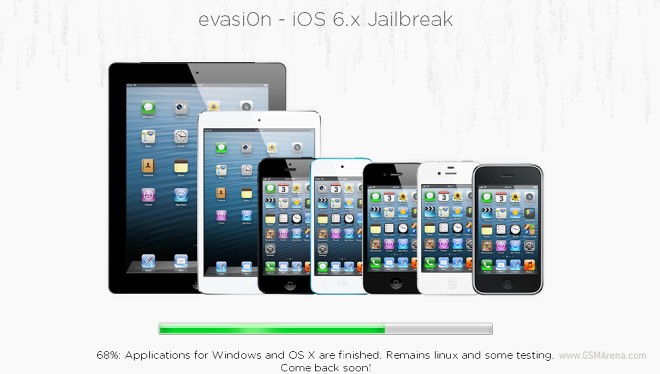 Not only that, but the jailbreak should work on all iPhones, iPads and iPod Touches running anything from iOS 6.0 to the latest iOS 6.1, as famous iOS community hacker MuscleNerd has confirmed personally on Twitter.

The jailbreak tool will supposedly be released on its dedicated website – evasi0n.com, which currently invites us to check frequently for updates.

It’s been quite a while since the iPhone 5 was launched with no proper jailbreak in plain sight. Apple has obviously done a pretty good job of designing an impenetrable system. For the jailbreak to work on both the iPhone 5 and the iPad mini, which uses a different chipset, these guys must have found some equally serious holes in the iOS 6 code for both the A5 and A6 series of CPUs.

We’ve been lied before by fake jailbreakers (but not with fake websites staged for the purpose), so it won’t surprise us if the whole thing turns out a practical joke this Sunday.

The Evad3ers team is comprised of veteran jailbreakers from the original iPhone Dev Team and the Chronic Dev Team, such as MuscleNerd, planetbeing, and pimskeks, plus pod2g, who was personally responsible for creating some of the most successful jailbreak solutions in the past.

So having this all-star team assembled kinda keeps my hopes high.