They joined Australia, Canada, Japan, South Korea, Morocco, New Zealand, Singapore and, of course, the United States, all of which had signed it October 1, last year. 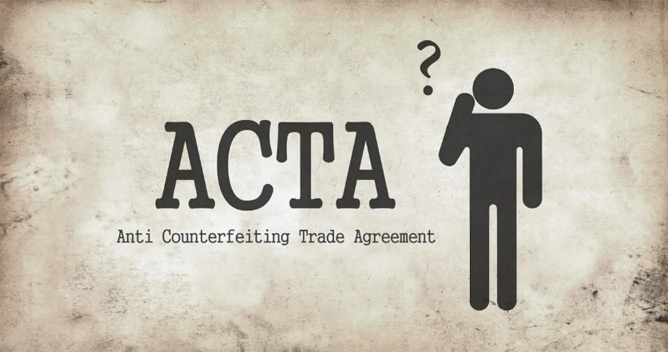 The Anti-Counterfeiting Trade Agreement or ACTA, as it’s more commonly called, doesn’t sound like much at first glance, but when you start reading into it and it won’t be long before you realize that it’s actually worse than the infamous US-only SOPA and PIPA put together.

Hidden behind the “Trade Agreement” part of its name, this international treaty has the potential to change the way we use the Internet forever. What it does is turn the attention from the suppliers of counterfeit and pirated products to the end consumers of those. You snatched your favorite TV show’s last episode of the torrents, did you? Well, you’re busted! It is that scary. Let’s break it down.

In short: it is the European version of SOPA. But here’s how it’s described in Wikipedia.

ACTA – ‘The Anti-Counterfeiting Trade Agreement’ is a proposed pluri-lateral agreement for the purpose of establishing international standards on intellectual property rights enforcement in Europe.

ACTA gets off on the wrong foot by combining counterfeiting and piracy into a single treaty and views them as similar things. Which they are not. Counterfeiting of physical goods describes the act of somebody selling you a fake Samsung, LG or Apple product for example, deceiving you into buying it thinking it’s the real deal.

Piracy, however, is when somebody distributes illegal and unauthorized copy of a real legit product – a movie, a piece of software, or a music track. See how those two don’t have anything in common?

This short video made by Anonymous tells it better than I ever could, so I highly urge you to watch it carefully.

Yes, you saw it right. Internet Service Providers will be obliged to trace every packet of information leaving or incoming to your computer. If that happens – we’d all be in trouble one way or the other.

What now? Is it too late to stop ACTA?

ACTA is not by any means new. It has been in the works for more than five years now and it was only brought to the public awareness thanks to WikiLeaks a while back.

The protest against SOPA and PIPA last week was unprecedented. People all over the world demonstrated that they didn’t want to browse in a censored Internet and many key websites like Wikipedia, Google and Reddit led a blackout protest to raise awareness among Internet users.

And for the most part – it was a huge success. SOPA and PIPA are put on hold indefinitely in U.S. Congress. But standing quietly unnoticed in the sidelines, ACTA was allowed to gathered quite a bit of momentum internationally and the outcry against it must be equally massive.

Let’s act and say NO to ACTA now.