Windows tablets are aggressively coming down in price, having reached the $100 / €100 mark. The Emdoor EM-i8080 packs surprisingly good specs for one Ben Franklin, but also some disappointing compromises. 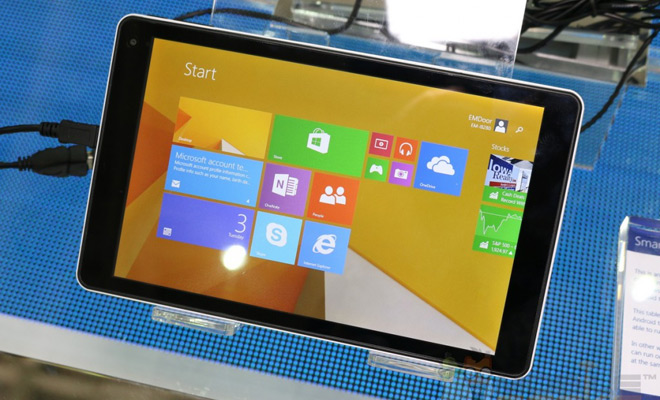 Memory is where the Emdoor tablet disappoints – it only has 1GB of RAM and 16GB of storage. Most of the built-in storage is already used up by the OS, but at least you can add a microSD card slot to get some extra room.

Keep in mind a 128GB microSD actually costs more than the tablet itself. Then again, a Windows 8.1 license alone can run you 100 bucks, so we can’t say this device isn’t spectacular value for money. And you get a miniHDMI so you can hook up the EM-i8080 to a screen to use it as a workstation.

There’s nothing you could do about the RAM though and despite Windows 8′s optimizations multitasking will be a problem. The chipset itself is capped to 1GB, clearly marking it as Intel’s entry level. At least you get four CPU cores at 1.33GHz (1.83GHz Burst frequency) and Intel HD graphics at 311MHz (646MHz with Burst).

The race is officially on – Toshiba has the Encore 7, a 7-inch Windows 8 tablet that will cost $150 and there’s bound to be more devices to come.

Thanks to Mr. A for sending this in!