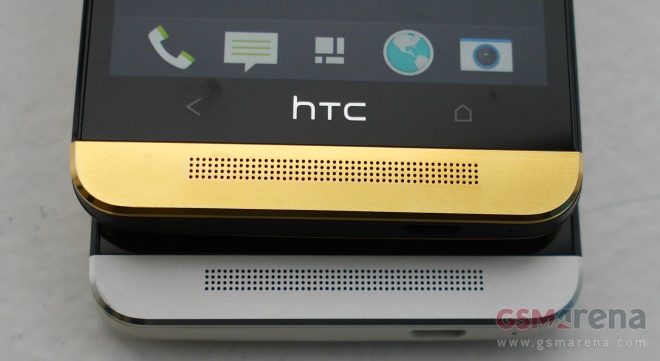 At a quick glance, the 24ct HTC One looks a tad more subtle than its 18ct sibling, thanks to its matte finish (the 18ct version is glossy, thus even more blinged-out). Head inside to check out our extensive photo gallery.

It is needless to say that the 24ct gold-plated HTC One is anything but understated in the flesh. The device makes just about any handset, including the regular HTC One, look ordinary.

The 24ct gold-plated HTC One is valued at more than $2,500. The amount is significantly less than the $4,400 which the 18ct version commands. This is due to the fact that the 24ct device is only gold-plated, whereas its 18ct relative has the precious metal used in its construction.

The above said, the 24ct appears a lot more usable on a daily basis. Its matte finish deals well with fingerprints, thus making the device handle a lot like a “regular” HTC One. In comparison, the 18ct version was extremely prone to fingerprints.

The duo of 24ct gold-plates HTC One devices will be given away during the HTC in NYC sweepstakes. If you are in the United States, you can enter the drawing over here.

In case you are after a gold HTC One, but you don’t live in the States, don’t despair. You can check out the newly released, mass-market Gold HTC One, or the Gold Genie version.