Gold seems like the new black these days. Apple did it, Samsung did it and we’ve even seen others do it for HTC. 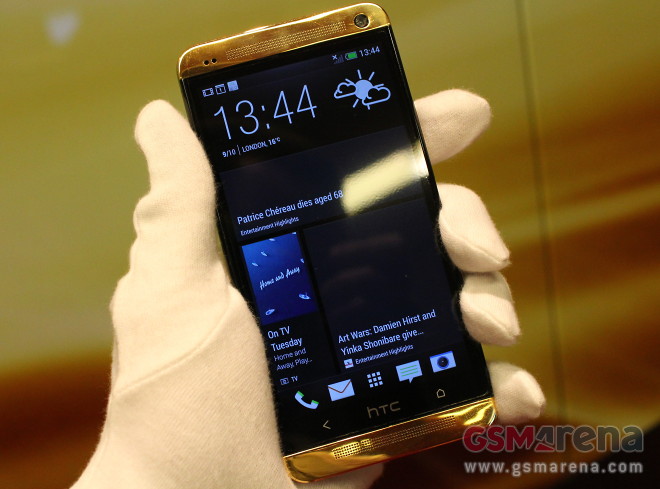 But this isn’t the 24-carat HTC One by Gold Genie, this is the 18-carat through-and-through gold-built HTC One specifically created for the 18 anniversary of the MOBO awards. We’ve got the hands-on treatment inside, let’s go.

It’s kind of an insane idea so we’ll repeat ourselves – this is an HTC One entirely covered in18-carat gold with a laser-engraved MOBO logo on the back. The handset has been made in only one batch of 5 (five!) phones, which screams exclusivity.

The golden HTC One puts the “golden” iPhone 5s to shame by bringing the actual premium material to the picture and not just its color. You can check out the difference above and below. We got to handle the shiny new smartphone and it feels quite similar to its mortal sibling – it handles the same and if you don’t look at it, you might not be able to tell the difference.

What we did notice is that the surface of the phone was easy to get smudged and was already a bit scuffed here and there. What we take from it is that gold isn’t the most durable material to use in smartphones and it certainly appears less suitable than the aluminum that covers the regular HTC One.

The golden edition HTC One

Interestingly the gold edition HTC One weighs just 4 grams more than the normal one, despite the relatively higher weight of the material used.

The golden HTC One held in hand

The severely limited numbers and opulent pricing aside the HTC One in gold feels and looks really nice and can work as a smartphone as well – all the radios are intact. But before you even think of getting one you’d best acquire some kind carrying case – and you better make it a crocodile leather one too.