The BlackBerry PlayBook never gained the popularity that RIM was hoping for and rumors of a bigger 10″ version fizzled out. Vietnamese blog Tinhte however, received photos of just that – a 10″ PlayBook – right next to a PlayBook 4G (Sprint had plans to offer these but then canceled). 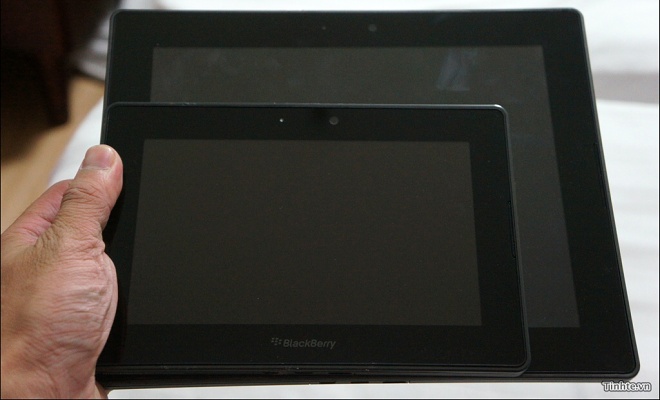 Interested to see what could have been? There are a few more shots after the break.

The 10″ BlackBerry PlayBook looks just like an upscaled version of the 7″ version with its rectangular looks and black bezel. The screen aspect ratio is different though – it looks closer to the aspect ratio of the iPad (4:3).

The PlayBook 4G looks identical to the current 7″ model – same size and everything, except for the SIM card slot, the added LED flash for the camera, and the “BlackBerry 4G PlayBook” label (though it’s not clear if it’s the HSPA+ or the LTE model).

What we’re seeing here is most likely left over prototypes. The PlayBook 4G never made it to Sprint but the model might still materialize as there are rumors that Bell Canada will be launching that model tomorrow. The fate of the 10-inch model is even more uncertain.