The Samsung Galaxy S4 was caught ramping up its GPU clock speed when running a benchmark, so naturally the Galaxy Note 3 was under suspicion too. Thanks to some excellent detective work by Ars Technica, now we have a confirmation. 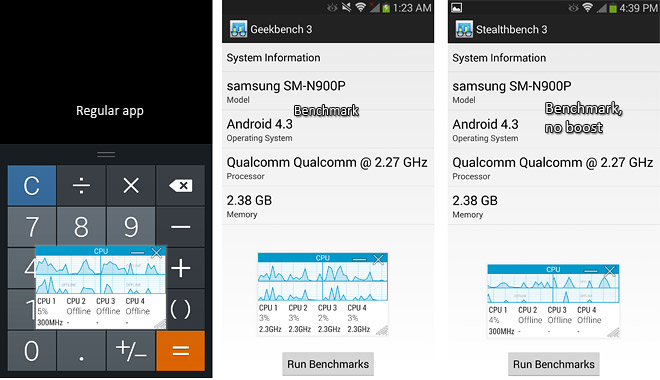 The Samsung Galaxy Note 3 N9005 (the Snapdragon 800) version was tested against the LG G2 (same chipset) and it came out well ahead, even though the internals are identical.

Using a CPU monitor, Ars found out that certain benchmarks are detected and the CPU is put on full throttle – all four cores run at 2.26GHz all the time. When a non-benchmark app is run, when the app is idling three cores are off and the fourth one is at 300MHz.

To get around the issue a special version of Geekbench 3 was created – since benchmark detection depends on the app’s package name, Ars renamed the package and the CPU showed its regular “three cores off, other one at 300MHz” idle behavior. The list of benchmarks that are treated specially also includes, GFXBench, Benchmark Pi, Linpack, Quadrant and other popular titles.

And while the CPU monitor doesn’t catch it, there’s more going on than can be explained by disabling the idle mode of the processor. Geekbench 3 scores are 20% higher with the artificial boost, while Linpack (also a renamed version) showed a whopping 50% difference. Without the boost, the benchmarks are around the LG G2 scores, where you would expect them to be. In all fairness the Note 3 does have some advantage remaining, only it’s not as big as initial tests suggest. 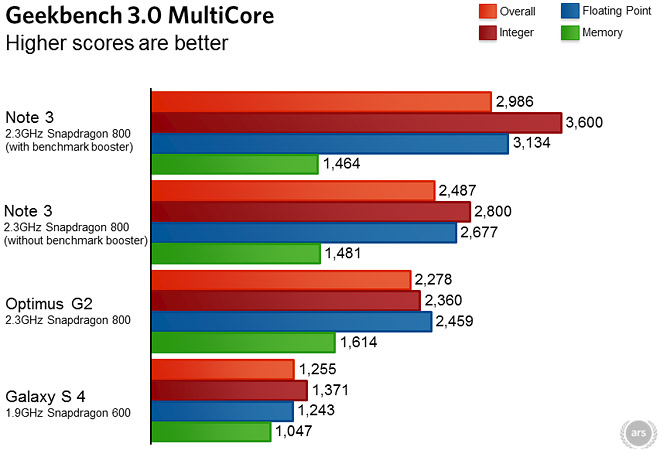 Source code for the Note 3 also refers to “LCD frame rate adjustment,” so the GPU might be getting boosted too.

While it’s not 100% clear what the boosting involves, by the looks of it Samsung targets benchmarks specifically – if Samsung had included some games, we might take this as a special optimization, but with just benchmarks it seems like trying to cheat.