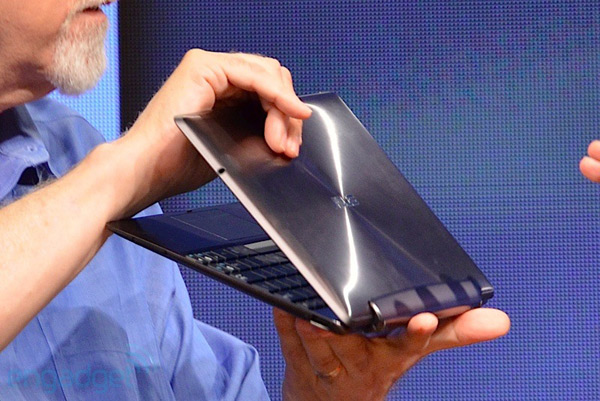 Shih also showcased the Prime’s laptop dock, which looks thinner that last years’ model. The Prime will feature a 10-inch IPS display and pack a 14.5-hour battery, which will power Nvidia’s quad-core Kal-El platform and we expect 1GB of RAM (though hope it’s more). The tablet will also have a mini-HDMI port, as well as the usual microSD card slot.

The look of the tablet has changed as well. Its back cover now has a spun metal finish, like the one found on the company’s Zenbook laptop line and it’s just 8.3mm thick. According to Shih, the Transformer Prime will initially launch with Honeycomb, but expects Ice Cream Sandwich to hit tablets worldwide by the end of the year.

He also slipped a date for the Prime’s official reveal scheduled for November 9. Can’t wait!