Xolo launched its newest smartphone dubbed Q1010i only a few days ago. The device was said to be designed to bring excellent camera experienced at an affordable price tag. 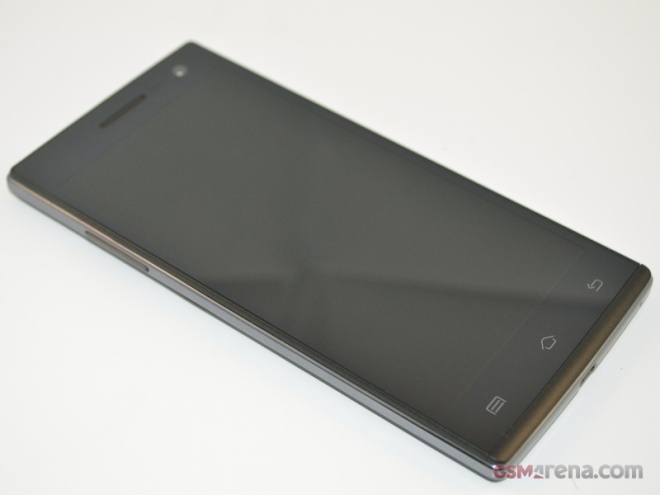 The Xolo Q1010i comes with a quad-core 1.3 GHz Cortex A7 CPU along with Mali 400MP2 GPU on a MediaTek MT6582 chipset. The device also sports an 8 megapixel Sony Exmor R sensor with f/2.0 aperture, 1.4 micron pixel size and a 5-element lens. We’ll see how it performs as a camera smartphone and of course, as an everyday device.

The Xolo Q1010i comes in a standard retail box, where you can find the A/C adapter, USB cable, headset, USB host-cable, some paperwork, screen protector as well as the nice surprise that is the flip cover.

Xolo has really stepped up its game and the overall design brings a lot of novelties. The Q1010i is built using high quality plastic with brushed metal frame running around the device, which gives a premium look to the smartphone – something rather hard to find at this price point. The device is a bit on the heavy side but that also contributes to the very solid in-hand feel it gives.

On the front we have the display along with the three capacitive touch buttons – home, back and menu. The virtual buttons are not placed on-screen and are found on the bezel, below the display. There is a secondary camera along with an array of sensors located on top.

The power button is on the right side of the smartphone, while the volume rocker is on the left. The 3.5mm audio jack is placed at the top and USB port is at the bottom.

The back of the smartphone is where we see the 8 megapixel camera lens, the LED flash and the microphone for noise cancellation. The speaker grille is also here, at the bottom right corner. Underneath the back panel lies the non-removable battery along with the three card slots – one for the microSD card and two for SIM cards.

Xolo Q1010i sports a 5-inch IPS LCD display with a resolution of 720 x 1280 pixels. The numbers add up to a 294 ppi pixel density, which is quite sharp by any standards and you will have a hard time telling individual pixels apart.

The screen offers great colors and the overall quality is quite good. The viewing angles are pretty wide and we did not observe contrast compression or color shift when viewing the display from various points.

The Xolo Q1010i runs on Android 4.2 Jelly Bean, which is quite disappointing in the day when 4.4 KitKat is available. The overall looks of the UI is quite similar to stock Android, but the device does include a few software customizations from Xolo.

More often than not, the smartphones runs smoothly without any hiccups, thanks to its quad-core CPU and 1 GB of RAM. There is occasional lag, but we believe that’s largely due to some bugs the device comes with.

The first interesting bit of home-backed software that the Xolo Q1010i brings is the power management app that is dubbed Xolo Power. The specially designed app is aimed to enhance the overall performance of the device’s battery.

The interface of the Xolo Power is quite simple and user friendly. The app shows you the remaining battery level, temperature of the smartphone’s battery and estimated hours of usage.

The Xolo Secure is other interesting app from the company. The security app allows you to protect your smartphone in case it gets stolen or misplaced. With Xolo Secure, you can back up your personal data to the cloud and all you need to activate the app is to login with your Google account and provided all the necessary permissions.

Once that is done, you get to configure the Anti-Theft options, using which you can remotely track your smartphone, wipe all its data, secure lock or even secretly capture images from it.

We decided to take the Xolo Q1010i for a spin in an attempt to stack it up against some of its rivals. The Cortex A7 CPU is not exactly a king of benchmark scores, but has the company managed to get the most out of it? Well, let’s see.

First up was the single core performance test with the help of the Benchmark Pi app. It was really surprising to see the smartphone punch above its weight with a healthy score of 275.

We then had the Mali 400M2 GPU sweating it out at the Epic Citadel test. The Xolo Q1010i managed to come up with a respectable score that is on par with the 2012 flagship smartphones.

Last up was the analysis of web browsing performance of the Xolo Q1010i. And, the smartphone again came up with impressive numbers that almost matched those of the Samsung Galaxy S4.

The camera interface is largely similar to what we had seen on the Xolo smartphones in the past. The UI is quite simple and the settings menu is divided into three categories. The general tab is where we find settings like the exposure bias, color effect, scene mode and white balance. The specific still image settings and video capturing options are organized under the other two tabs.

Xolo gives you a range of different shooting modes such as HDR, Panorama, multi angle view image, macro and many other such options, which you could choose easily from the bar running on the left side of the camera interface.

We took a few samples from the 8 megapixel snapper on the Xolo Q1010i and we were pleased by the overall image quality. The color rendering is quite good and the resolved detail is decent. There is quite a lot of noise, but it’s still among the better shooters in this price range.

Xolo Q1010i is priced at $230 and is already available in the Indian market. The smartphone is an interesting offering especially considering its display and performance. The MediaTek chipset offers a solid smartphone experience, which is still rather rare in the lower mid-range.

The 8 megapixel rear camera is undoubtedly the standout feature of the device. The performance of the shooter can hardly be matched by any of its competitors that are currently in the market.

Unfortunately, while the hardware specifications are impressive for its price, the software running on the Q1010i comes with a fair share of bugs that often has a negative impact on the real-life performance of the device. As long as Xolo can correct that with timely patches and upgrades, the company might have a real winner on its hands.

Brand name aside, the smartphone can easily compete against the likes of Motorola Moto G, Sony Xperia C and Samsung Galaxy Grand Neo and a few other smartphones that are priced well above Q1010i.

All things considered, the Xolo Q1010i hardware does more than enough to justify the price tag it comes at. With a premium design, a good screen, quality camera, impressive performance and dual-SIM capabilities the device has got more character for a mid-ranger.