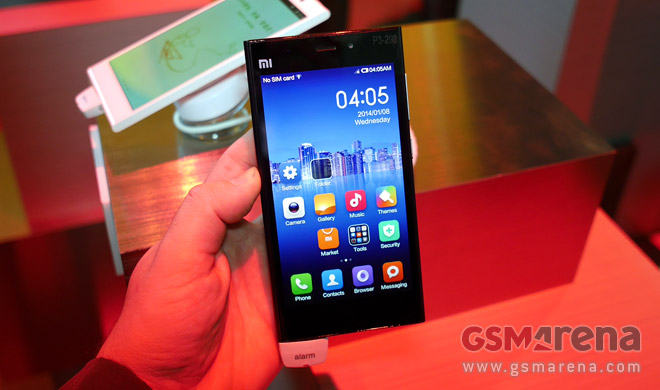 It’s an Android-powered phone but Xiaomi uses a custom interface – MIUI v5 built on Android 4.2. It looks and feels quite different.

And so does the device itself – the MI-3 design is a clean break from previous designs. It’s rectangular, with rounded left and right sides and flat top and bottom sides. It’s similar to the Nokia N9 and 800, for example.

It helps that the phone is just 8.1mm thick and that’s uniform thickness too (so, no cheating with camera bumps). The bezels are pretty big though, making it the same size as the Sony Xperia Z1. Anyway, the MI-3 exterior is a plastic unibody, but there’s an magnesium alloy frame on the inside. At 145g it’s a tad heavier than, say, the Galaxy S4, but it’s still a good 25g lighter than the Xperia Z1.

The Xiaomi MI-3 follows the current Android trend with a 5″ 1080p screen, which is protected by Gorilla Glass. Xiaomi uses IPS displays from Sharp or LG and the capacitive sensor can detect touches through gloves. Below the screen are three capacitive keys – Menu, Home and Back – but again, Xiaomi uses a custom software that’s optimized for this setup.

Around back there’s a 13MP camera with a Sony Exmor sensor, 28mm lens with f/2.2 aperture. Next to the camera there’s a Philips dual-LED flash and an additional mic. Xiaomi took a page out of Apple’s book and used a sapphire lens. Under the back cover there’s a 3,050mAh battery, which is more than most 5″ phones but again, the MI-3 is bigger than most 5″ phones and the Xperia Z1 has a 3,000mAh battery too.

The phone is powered by either a Snapdragon 800 chipset or a Tegra 4, depending on which 3G tech the respective carrier uses (WCDMA and TD-SCDMA respectively). Strangely, there doesn’t seem to be LTE support on either version. Other than 3G, the MI-3 boasts dual-band Wi-Fi, Bluetooth 4.0 and NFC connectivity.

The microSIM card slot is on top, next to the 3.5mm audio jack. On the opposite side of the phone there’s the microUSB port and the loudspeaker.

The Xiaomi MI-3 doesn’t have a microSD card slot but the storage options are 16GB and 64GB. There’s no middle step though.