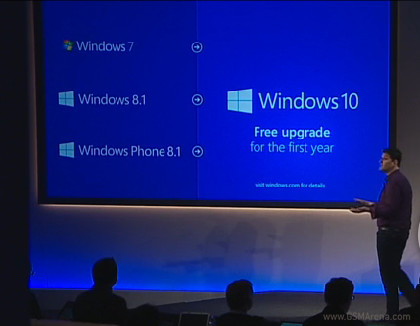 Namely, the software giant has revealed that for one year after the official launch of Windows 10, you’ll be able to upgrade to the new version for free.

That’s regardless of whether you’re using Windows 8.1, Windows 8, or even Windows 7. This move is clearly meant to entice as many people as possible to make the jump to Windows 10 as soon as possible after it gets released, with Microsoft possibly hoping to have some very nice adoption numbers for the new OS a few months in. It is, however, following in the footsteps of Apple, which has pioneered free desktop OS upgrades.

It’s still unclear what will happen after that one year passes, as Microsoft itself doesn’t yet know. It is also working on an update to Windows 10 for Windows RT, its Windows 8 variation for ARM-based devices, but has yet to share more details on that.

Free upgrades for Windows Phone 8.1 were mentioned too, but once again without any more information. It’s clear that the company wants as many mobile devices to get the new software as possible, but it remains to be seen if all WP 8.1 handsets will actually receive the update to Windows 10.