Whip out the Sunday barbecue, it’s time to grill us some smartphonies

The best way to spend the weekend is with some friends and a barbeque. But to make it even more fun use a 10 US dollars BBQ and 1900 US dollars stakes – T-Mobile G2, iPhone 4 and HTC Surround. The result – empty credit cards, questionable Surround winner and angry internet users. 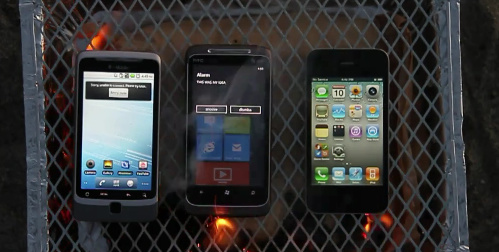 The point of this video is to show which is the most durable phone when dealing with heat. Well the WP7-powered HTC Surround’s lasted the most, but I’m not sure if it deserves the medal.

As some users already pointed it out, the cheap grill used to fry the phones is heated from the corners to the center. That’s why HTC Surround has quite an advantage over the other two poor fellas.

The other thing is that iPhone 4 has a thermal sensor, so if it was in a real overheating situation, I think the Apple’s gadget would have had the best chance to survive.

Anyway, the video says it all. I wonder what’s next – throwing expensive phones out of a plane while recording HD videos and then seeing which one’s parts will spread in a wider radius?

I’ve never understood those pointless videos about destroying electronics for thousands of dollars and I never will. Lucky me.

One thing’s for sure, that viral video will probably boost this cheap grill sales.