Where’s My Perry? stars Perry the Platypus, also known as Agent P from the Disney animated show Phineas and Ferb. Now those of you who are not six years-old would probably not recognize him but apparently he’s quite popular among the kids, which is why Disney chose to make an entire game around the character.

In Where’s My Water?, the player had to direct water (and eventually other fluids) to a pipe so that Swampy the Alligator can have a bath. In Where’s My Perry? you have to do basically the same but in this game water can exist in all its three states. The game’s premise is that Agent P is traveling through these transportation tubes but Dr. Doofenshmirtz traps him in them and the only way to free Agent P is to direct water or steam to the generator powering these tubes. 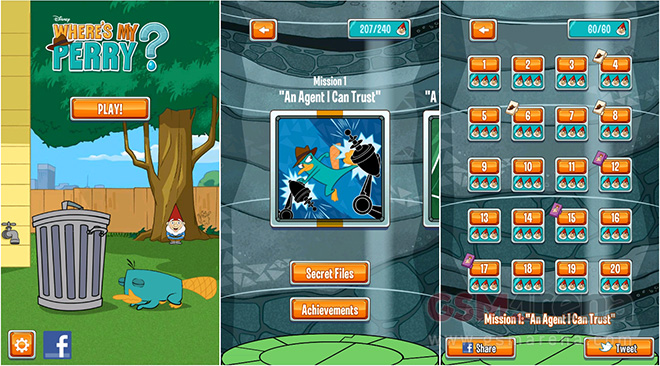 Some levels require you to direct the water, others require you to convert it to steam first. For this purpose, the game uses cleverly positioned lasers to transform water. The red laser turns ice into water and water into steam and the blue laser does the opposite. Eventually, you also get a black gel that can be used to block drains to prevent the water from running off or when mixed with the red laser turns into a red gel that evaporates water or blue gel when mixed with the blue laser that turns water into ice.

As before, you have to make proper use of the water and make sure not to waste it. You will need to manage it properly and use only as much as required. At times you’ll need to split it and use it accordingly. You need to remember that contact with lasers will convert all the water, so you will need to split it first, if required. The lasers also get deactivated once they come in contact with steam or water, so if you need them later, you have to be careful. Also, keeping water in close contact with ice turns the water into ice, which at times can be used to your benefit. You can also freeze water to create paths for the water to travel on. Red and blue lasers explode upon contact, which is useful for breaking through stone. Lastly, there is a vacuum in certain levels that sucks the water and turns it into confetti, so you need to avoid it. This might seem like a lot to remember but the game gives it to you gradually, so it’s never too much to handle when you’re playing it. 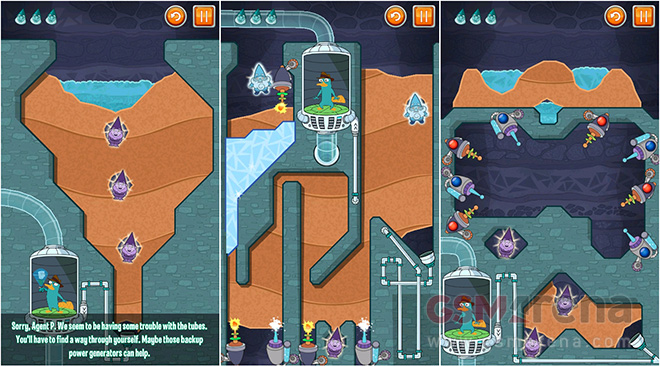 As with the previous games, there are collectibles in each level. The ducks in Where’s My Water? have been replaced with gnomes. There are two types of gnomes that you will find in this game, ones that can only be obtained with water and others only with steam. The gnomes can be killed with the lasers and the gel, so you have to be careful with those. You also have hidden secret files buried in the sand in certain levels. As before, the game lets you know when there is a secret file available for a particular level, so all you have to do is just cut through all the sand, find out where it is and then restart the level. It would have been more challenging if the game did not tell you if a secret is available in a level and left it up to the player to find it.

As before, you get score for the time you take to solve a puzzle, the number of gnomes you collect, overflow bonus for when you managed to direct more than just the minimum required amount of water or steam to progress to the next level and when available, secret files. The score gives the game a bit of replay value, so you can come back to previous levels and try to better your score by collecting more gnomes or doing it in less time.

Overall, the game is just as fun as Where’s My Water?. The puzzles offer just the right amount of challenge so that that the game never feels too easy or difficult. There are certain levels where you would feel hopelessly stuck, only to realize the solution later, which makes the victory even sweeter. If you do get permanently stuck, however, there aren’t as many walkthroughs available at the moment as there are for Where’s My Water? but they should start popping up be shortly. Just make sure you go to YouTube or any other site to check them out instead of downloading any app that might claim to offer walkthroughs as it could be a malware.

As for drawbacks, I found the constant comments from some of the other characters in the game quite annoying (Agent P himself never speaks). Most of them are either taunts from Dr. Doofenshmirtz or Major Monogram telling you to hurry up. There are few of them and they keep getting repeated with every other level. If you played Cut the Rope: Experiments, you know what I’m talking about. Thankfully, like that game, you can disable the dialogues in this game as well.

Being a 2D game, performance was mostly excellent, even on the older Nexus S. Occasionally, during the later levels when too many things are happening on the screen, the game can slow down a bit but it’s never bad enough to be annoying. Visually, the game employs the same cartoon style animation as Where’s My Water? and recent Disney cartoons.

Overall, I’d say, the game is well worth the dollar even if you have played Where’s My Water? before. Only problem right now is that there are only 80 levels, though more are planned too. If you get particularly addicted to the game, you could easily finish it in a day (assuming you’re good at it). There are a few additional levels which get unlocked as you collect more hidden files, where you have to direct a balloon through obstacles as it floats upwards, but these are not as fun as the main levels.

Where’s My Perry? is great for kids who might be able to relate to the characters better but even for adults the game is an excellent way to pass the time.