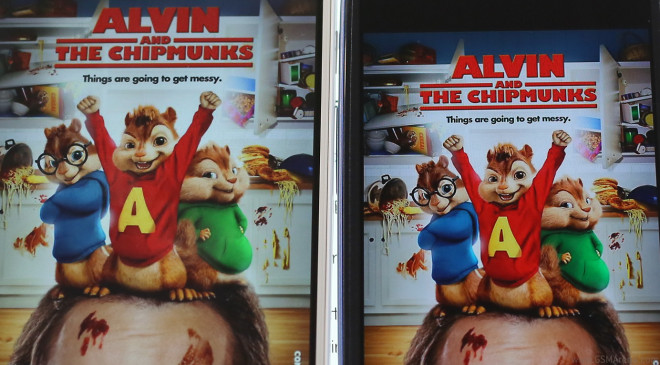 So, the screen junkies that we are, we decided to get out the Galaxy S III and put its Super AMOLED 720p screen next to the True HD-IPS+ 1080p LCD of the G Pro.

On paper these two screens are quite different. The LG smartphone has an LCD with a full RGB matrix, while the Galaxy S III’s is a Pentile AMOLED.

Pentile is old tech (we saw it on devices like the original Galaxy S) and doesn’t feature the full set of subpixels – it has regular green pixel count, less red and blue pixels than an RGB. Still, at 1280 x 720 resolution the 4.8″ Super AMOLED has a pixel density of around 306, which is well into retina territory.

Now that we have taken care of the formal introductions, it’s time for these two to meet. 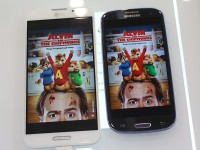 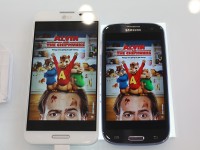 A head on image of the two screens

Looking at both screens head on you’ll immediately notice the Super AMOLED’s advantage. The class-leading contrast shows in the images. Colors are over-saturated compared to the LCD of the LG smartphone and generally look warmer and more pleasing.

However, the Optimus G Pro screen has really punchy colors too, especially for an LCD. Plus, LG made a big point about the color rendering being 100% accurate as opposed to the one of the Super AMOLED screen. 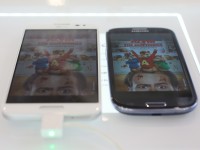 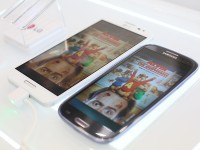 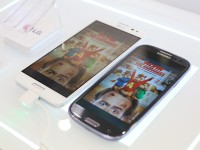 Check out the reflective surfaces and viewing angles

Then we come to viewing angles and reflectivity. Samsung’s device has the upper hand here with the typically superb Super AMOLED viewing angles.

The LG Optimus G Pro screen is more reflective too. And there is contrast loss when you’re looking at the screen at an angle – but it isn’t Xperia Z bad, being an IPS unit.

Overall, the LG Optimus G Pro stays in line with the Optimus G with the obvious advantage of increased size and sharpness. We’d gladly recommend it to a friend.