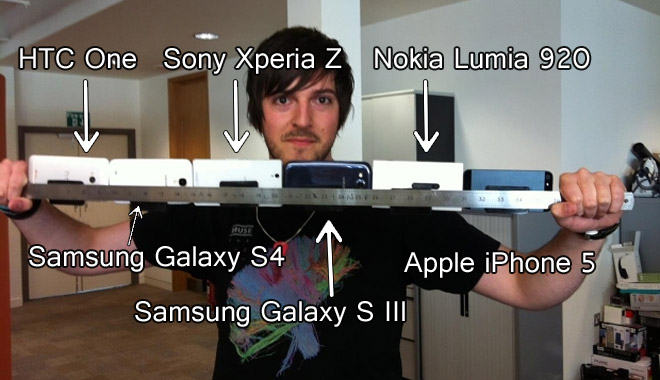 The Nokia Lumia 920 and HTC One naturally were involved in the test (the two phones that do have OIS), then there are the Samsung Galaxy S III and S4, the Sony Xperia Z and the Apple iPhone 5.

The phones were all strapped to a metal ruler and videos were recorded. Here’s the video that combines footage from the six phones. You can head over to CNET to view the individual videos. Since the all six phones hoot at slightly different framerates, the combined video has to force them all to the same fps, which changes how it looks.

From the video it looks like the Galaxy S III does the worst job at countering hand shake, with the Galaxy S4 representing a notable improvement over its predecessor. Still, the Sony Xperia Z and Apple iPhone 5 did a better job than both. Nature, the OIS-enabled Lumia 920 and HTC One ended up clear winner.

Still, the test is highly unscientific – the metal ruler might have flexed during the test and even if it didn’t, the phone that are in the center (Xperia Z, Galaxy S III) would have had less shake to deal with than the ones on the outside.