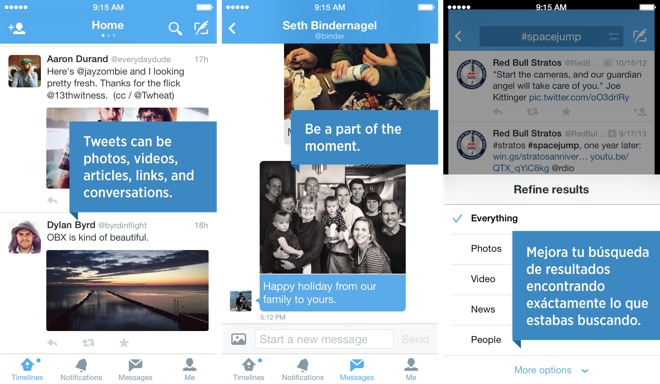 Twitter is pushing their Activity and Discover section in a big way with the latest updates, that show you activity of the people you follow and other people on Twitter respectively. On the iPhone, you now swipe on your timeline to go to the new sections, indicated by the three dots at the top.

These are even more prominent on the Android update, loses the previous ‘Connect’ and ‘Me’ tab completely in favor of ‘Discover’ and ‘Activity’. The interactions have now been moved into the Notifications section indicated by the bell icon on top, along with buttons for DMs, Find People, Search and menu button. The new tweet button has been replaced by a permanent text field at the bottom with convenient shortcuts for adding a photo from gallery or taking a picture using the camera. While these are convenient, coupled with the buttons within the tweets it makes the Android version look severely cluttered due to the overload of buttons (at any point of time there will be at least 20 buttons on the screen at once, counting those in the tweets). 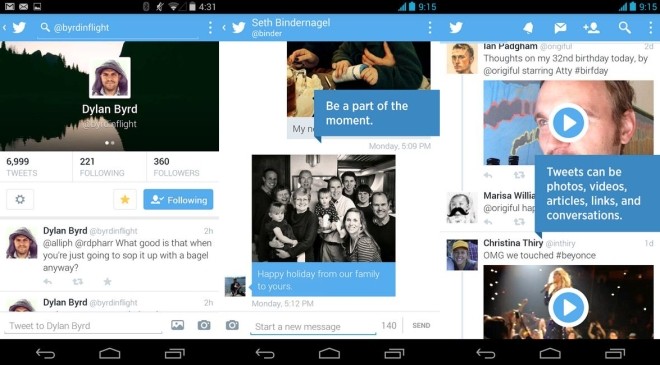 Another major new feature is the addition of sending photos in direct messages. Something shockingly missing until now, the latest update catches up with the times and now lets you send photos in your DMs. Currently, only these two apps support this feature (the website will show the image but not let you send it). None of the third party Twitter apps will let you send or show the images right now.

Other changes include improved search function, Safari Reading List support on iOS and the ability to mark an account as favorite so you can get push notifications every time you tweet (this was there before as well, they just changed the UI; great for stalkers).

While the v6.0 is available on iPhone, iPad and Android, the iPad version does not get the new UI found on the other two, although it does have most of the other features, such as photo DMs.

You can download the respective versions from the link below.