Statistics says most Android apps are free, Microsoft needs to lure in more developers for WinMo

Digging through statistics for the various app stores reveals interesting things about each platform – for example, Android is still the king of free apps, the most popular entries in the Apple App Store are almost exclusively games, and Windows Mobile still lives with it’s Mom, half of apps in the Windows Marketplace are written by Microsoft…

Distribution of prices in the various app stores

Google’s Android Marketplace contains primarily free apps – 57% by Distimo’s estimate (Androlib says 62%). This is much more than the competition. Less than a third of the apps in their catalogs are free. Even so, half of apps in most app stores (save for the WinMo and BlackBerry ones) are under 2 US dollars.

The Apple App Store in general has about 28% free apps, but it differs quite a bit when it comes to paid apps. The iPhone apps run around 2.62 USD (average price for the 100 most popular apps), while iPad specific apps cost 6.02 USD by the same metric. 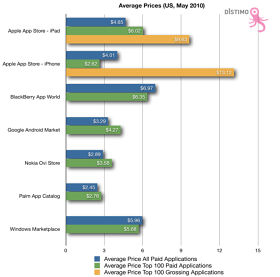 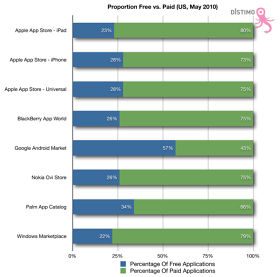 Surprisingly, paid Android apps are quite “costly” – 4.27 USD average for the top 100 apps. Nokia’s Ovi Store and Palm’s App Catalog apps are between 2 and 4 dollars of average price, but the Windows Marketplace and the BlackBerry App World are pricey, both at around 6 dollars (BlackBerry’s App World doesn’t allow paid apps cheaper than 2.99 USD).