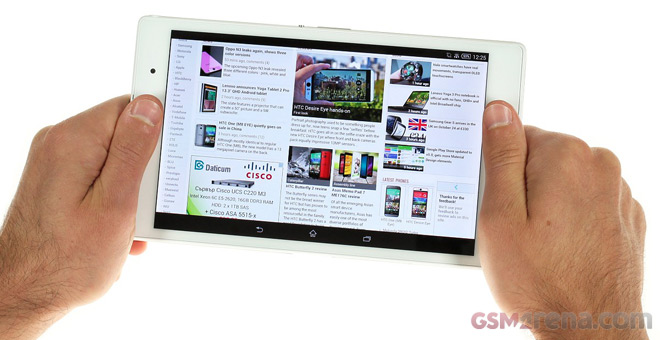 There’s not much to the box – a charger and a microUSB cable. It may be worthwhile to invest in a magnetic charging dock or at least a cable so you don’t have to open the flap that protects the microUSB each time you want to charge the tablet.

Sony Xperia Z3 Tablet retail box and the tablet itself

This is to ensure an IP68 rating, Sony has tested the tablet under 1.5m of water for 30 minutes. The 3.5mm audio jack and the front-facing stereo speakers are left uncovered, while the one/two card slots are behind flaps.

The stereo speakers are backed by some software enhancements, but it’s the 3.5mm audio jack that brings the big guns – Hi-Res audio support, DSEE HX and built-in support for noise-cancelling headphones.

The screen is a fairly sharp 8″ LCD with 1,920 x 1,200 pixel resolution, though not quite as sharp as 2,560 x 1,600 pixel screens. Anyway, the Triluminos tech renders stunning reds and greens. We like that Sony’s default wallpaper cycles through colors to showcase the screen’s capabilities. Sony claims it’s the brightest it has made yet, we’ll be sure to put that claim to the test.

The chipset at the heart of the Xperia Z3 Tablet Compact is a Snapdragon 801 with four Krait 400 cores at 2.5GHz, 3GB of RAM and Adreno 330 GPU. With a lightly-skinned Android the interface flies, but it’s gaming that’s the real challenge for the chipset. The Sony Xperia Z3 Tablet Compact can play just about any game from the Play Store, but with PS4 Remote Play it can also serve as a wireless screen for a PlayStation 4 or serve as a DualShock controller.

Unfortunately, instead of playing Destiny we’ll be running benchmarks. And battery tests too, Sony is promising great performance despite its relatively modest 4,500mAh battery. That may not sound like much – and it isn’t – but it’s about the norm for 8″ tablets. Still, the Samsung Galaxy Tab S 8.4 is nearly as thin and has 400mAh more in its tank.

The tablet features optional LTE connectivity – Cat. 4 for up to 150Mbps downlinks but does not do voice calls. Both the 4G and the Wi-Fi only versions have Wi-Fi a/b/g/n/ac, Bluetooth 4.0, ANT+ and NFC. The microUSB port is MHL 3.0-enabled and doubles as TV-out. The good news is that it’s not on the same side as the magnetic charging port so you can use it while the tablet is docked. The 3.5mm audio jack is clear too, unlike on the Xperia Z2 Tablet.

That’s it for now, we’re off to shoot camera samples with the Sony Xperia Z3 Tablet Compact and work on the review.