The Sony Xperia Z2 is finally here and despite coming to market just five months after the Xperia Z1, it improves quite a few bits of the package making for a very tempting upgrade. 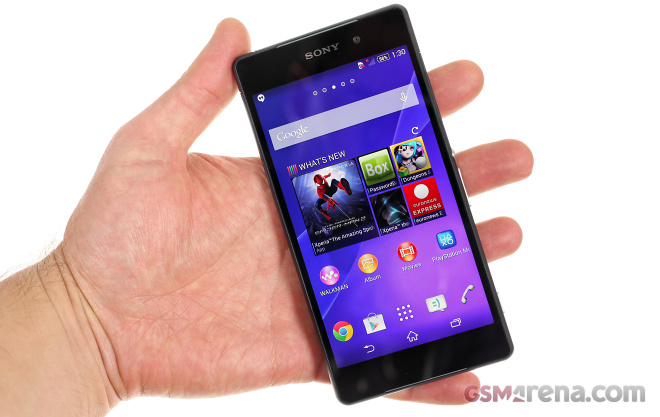 The Xperia Z2 is only slightly taller than its predecessor but compensates with less width, girth and lower weight. More importantly, it fits a larger 5.2″ screen and stereo speakers at the front.The display itself comes with Sony’s latest tech, including the Triluminos tech and X-Reality Engine, and this time it’s an IPS unit for improved viewing angles.

The Snapdragon 800 chipset with quad-core 2.2 GHz Krait CPU and 2 GB of RAM are gone and in their place we have a more capable Snapdragon 801 with 2.3 GHz CPU, faster GPU and 3 GB of RAM.

The camera is still a 20.7 MP unit with a large Exmor RS 1/2.3″ sensor and bright f/2.0 G lens but thanks to the better SoC, users now get UHD 4K video recording and slow motion 120 fps video at 720p resolution to match the likes of the Galaxy S5.

The hardware advancement don’t stop there – there’s a bigger 3200 mAh battery and Sony has even put in stereo speakers – a much needed improvement to the Xperia Z1′s mono speaker – we’re yet to see if they are any good.

Software wasn’t left behind, either. The Sony Xperia Z2 is the company’s first smartphone to ship with Android 4.4.2 KitKat, with the Xperia UI sitting on top of it. The latter has seen some improvements in KitKat and now has a flatter look, navigation buttons that lack the semi-transparent background and make good use of Google’s immersive mode which hides the nav buttons in many apps for seamless fullscreen enjoyment of media. There status bar is also transparent and everything looks cleaner.

Sony has finally hopped on the Quick Settings bandwagon and you get them ready as your second pane when swiping down the notification area.

There’s also a new, minimal lockscreen – you can unlock the device with a finger swipe anywhere on the screen. There’s a new sparkle animation that tracks your finger as you do so as well.

Here’s a video showing the Xperia Z2 in action.