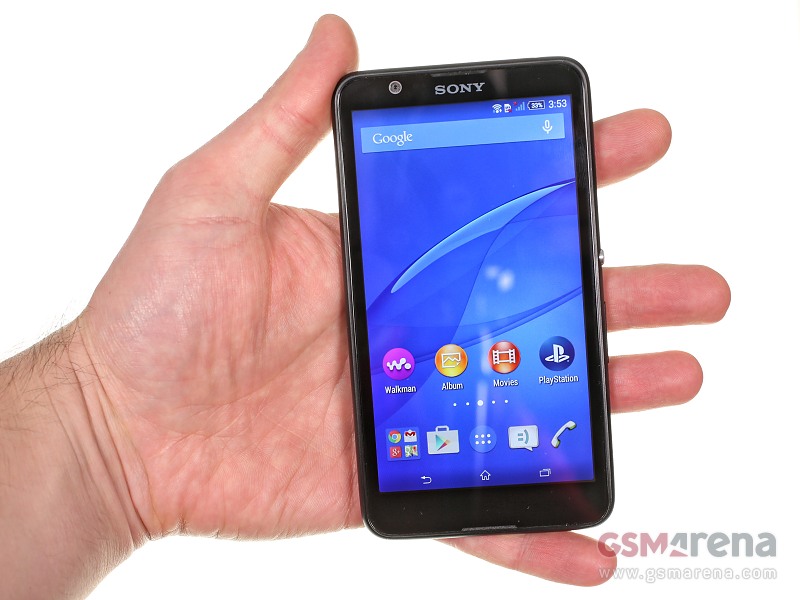 Design-wise there are some rough edges, and I mean that quite literally. The E4 comes with a removable back cover which surrounds the whole back side of the phone and makes for a quite bulky appearance. Still, it lacks a replaceable battery.

It almost looks like the device is constantly sitting inside a quite beefy bumper case, which is definitely not the sleekest look. Still the phone manages to retain a lot of the Xperia spirit and is instantly recognizable as a Sony. The speaker and microphone shape and position, the classic power button, everything is there, just in a more economical package.

On the hardware side, the Xperia E4 doesn’t really offer anything to impress, but in this price range having a decent and reliable product is all that counts and Sony has definitely delivered in this department. Brand awareness should also prove invaluable for the phone’s success on today’s cluttered market, with more and more budget solutions flooding in from China.

The Xperia E4 is powered by a MediaTek MT6582 chipset with four Cortex-A7 cores, clocked at 1.3GHz and a Mali-400MP2 GPU and comes with 1GB of RAM. This is essentially a mid-range chip form a generation ago and is definitely starting to show its age.

The 540 x 960 pixels IPS panel only further cements the retro vibe. And while colors looks pretty nice, sharpness is very off and viewing angles are quite poor, things you really don’t want to see in a 2015 phone, but more on that later.

The camera setup is in tune with the rest of the specs sheet. The main camera is a 5MP shooter with 1080p video, while the selfie camera is a 2MP/720p unit. The selfie camera is an improvement over the VGA snapper of the Xperia E3 and you get double the storage out of the box – 8GB. There’s a microSD card slot, of course.

The Xperia E4 runs on Android KitKat 4.4.4 but being a 2015 phone, it could possibly get updated to Android 5.0 Lollipop further down the road. Other than that, the UI is built around the standard Xperia launcher, which has really come a long way and now offers an array of small tools and improvements and really holds its own.

It is generally a refreshing sight to see such a broad array of software features on a cheap phone, so what the E4 loses in design and material, it definitely makes up in functionality. Our brief video below can give you a general impression of the user interface.

Naturally, we’ll run our comprehensive test routine in the coming days, so stay tuned for the full review.