With all the commotion about VoIP over 3G networks, the Skype versions for feature phones and Skype for Windows Mobile died a quiet death and almost no one noticed – instead of an obituary, all the two Skype versions got was an entry into the FAQ. 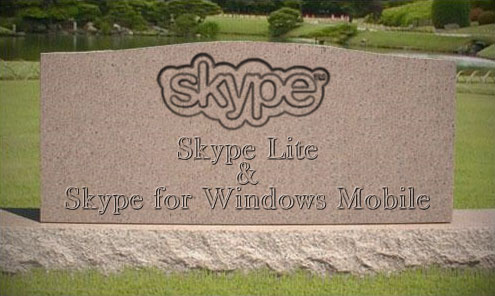 Skype “withdrew” the Lite and Windows Mobile versions because they wanted to offer their new customers an improved experience – something at which these two versions obviously weren’t succeeding at. As the FAQ says, “Skype Lite and Skype for Windows Mobile were not offering the best possible Skype experience”.

How does discontinuing an application improve the experience? Sure, new users won’t have to deal with the unfortunate, underperforming app that apparently wasn’t as good as the iPhone version, but then again there won’t be new users at all.

Anyway, if you were one of those that actually used Skype Lite, you can continue using it throughout 2010, but it sounds like that’s the end of the road. Windows Mobile users can continue using their native version too and there’s no date mentioned, so I guess that this version will continue working even after New Year’s Eve 2010.

Both download pages are still accessible through Google, and the Win Mo version is even downloadable. So, get it while it lasts, ok?. The Lite page is still up as well, they even sent me an SMS with a download link, but I don’t think you can download it anymore.

Note that when they say “Windows Mobile” that does not include Redmond’s brand new mobile OS, Windows Phone 7.